Exciting times for mainland European fans, Eaglemoss' Official Starships Collection has now launched in Germany (the same launch includes Austria and Luxemburg too), and France, and subscribers there get the option for even more ships! As in other countries, subscribers get the extra models of the All Good Things... USS Enterprise-D, and Borg Cube, plus the Enterprise-D dedication plaque, and a folder.  Plus the first issue is €4.99, before going up to the regular €14.99 for subsequent issues.

But then there's more! If subscribers opt into a premium subscription, for an addition €1.50 per issue they also get model shuttlecraft. The German subscription website lists four shuttles to be included, which will be slightly smaller than regular models in the series, at about 10cm long. On the horizon for subscribers are the TOS shuttlecraft, for some reason they've opted specifically for Galileo II, the Type 6 shuttle of TNG origin, the USS Defiant's Type 10, and USS Voyager's Type 9. 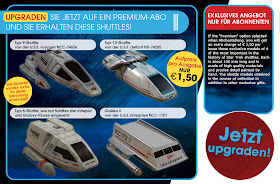 It's not clear how often these will be be delivered to subscribers; one would hope at least every tenth issue, which would bring the premium to about the same amount as a regular issue. It's also not noted whether or not each shuttle will have a magazine too.

Also unknown is whether these will be offered to subscribers anywhere else in the world, but I will do my best to find out!

As previously noted, the German series will also have a slightly different release order, and it appears the French release will also follow this revised running order. Continue after the jump for details of that, plus the German TV advert:

The German website lists the following release order, up to issue twenty, and the French website uses the same running order, but only goes up to issue thirteen so far:

And finally here's the German version of the TV advert: