The Eaglemoss Hero Collector shipyards are busy as every with new ships and stations on the way from almost every corner of the Trekverse. The latest previews include the first look at the first few ships from Discovery's 32nd century era, more previews of the first Lower Decks release, Eaglemoss' first Klingon starbase model, more classic TOS and TNG bonus issues, new bigger TNG shuttle models, and a Starfleet focused relaunch of the original Starships Collection! Continue below to check that all out.
So first, something Discovery fans have been waiting for, the first of the 32nd century ships from season three are finally joining the running order in the Star Trek Universe: The Official Starships Collection(ad). After mostly Picard ships in that series so far, with issue eleven we get the USS Discovery-A, complete with floating nacelles held away from the ship with little clips: 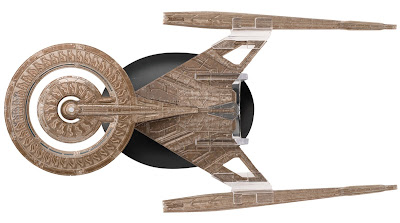 This is the first of the many 32nd century ships Eaglemoss have produced, and so the first time we can see their solution to the floating nacelle production dilemma. I imagine this is going to the cause of much debate among starship collectors; the clips are not exactly discrete, but they do continue Eaglemoss' long-standing aim of not altering the form of the ship itself by punching holes into it to attach a stand (or maybe in this case more discrete fixed supporting connectors between the different parts) - As is evident from Eaglemoss' own photos, nacelle alignment is going to be something to arrange very carefully when putting this model on display. 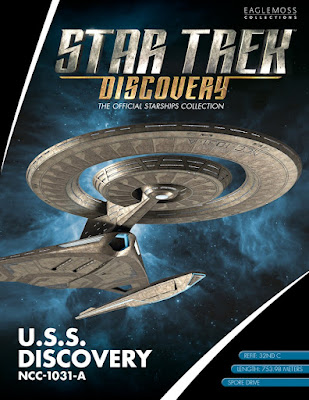 We can expect the Discovery-A to arrive in January. It will be followed by more ships of the 32nd century, which IGN have released preview images of. Issue 12 will be Book's ship, which in it's standard configuration avoids the separated parts problem, and is a welcome unique shape to join the model fleet. 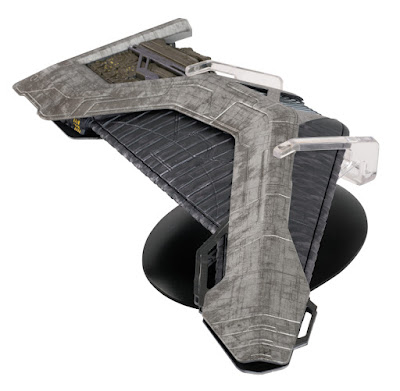 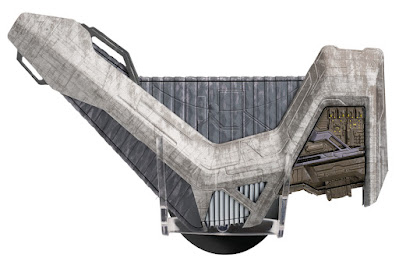 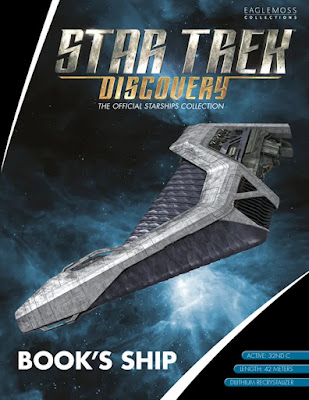 This will be followed by the USS Voyager-J. 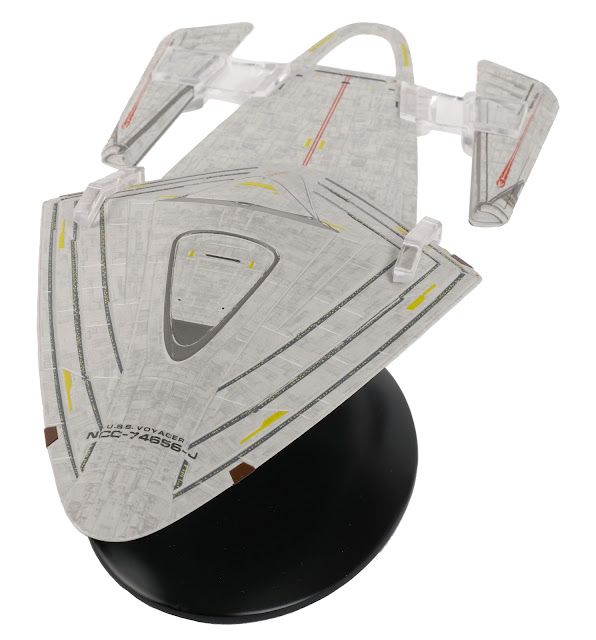 No doubt the rest of the 32nd century Starfleet will make up much of the next year or so of releases, probably with a few other ships throw in for variety.
In other news from the Universe Collection, the two prints that have been offered as specials so far to subscribers are now available individually to everyone via the UK webshop (and presumably will turn up in other markets shortly). Both prints feature artwork by Discovery concept artist Ryan Dening. #1 is titled simply USS Discovery NCC-1031-A, and features that ship, while #2 is Starfleet 3189 and features a cool armada of most of the different Starfleet ships of the era. 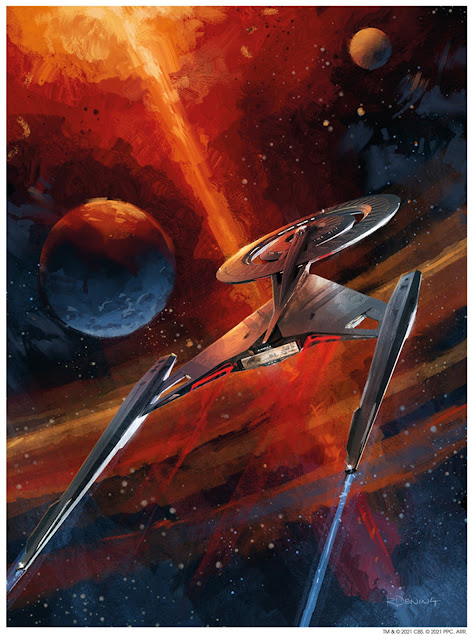 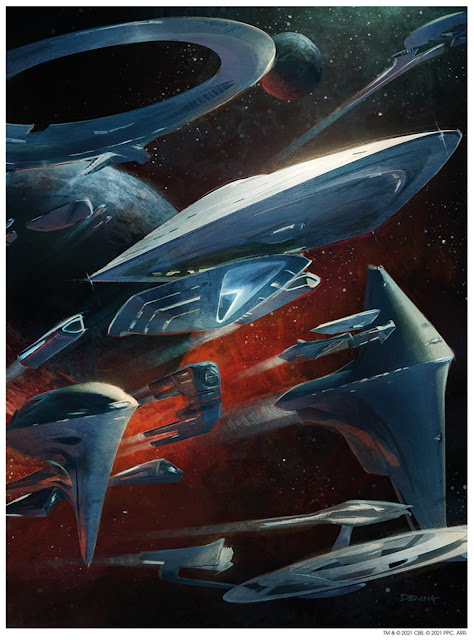 In other corners of the Eaglemoss starships world, there are some new preview images of the first Lower Decks ship, the XL edition of the USS Cerritos(ad). Eaglemoss have now noted this as special/XL #1 in the fully separate Lower Decks collection (rather than it being part of the catch-all XL series). 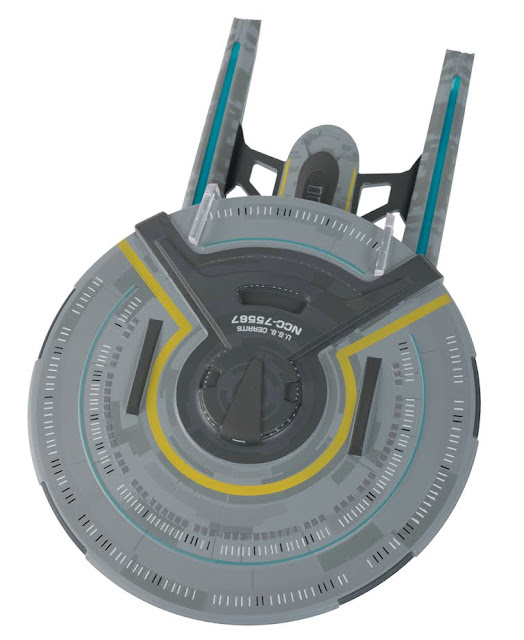 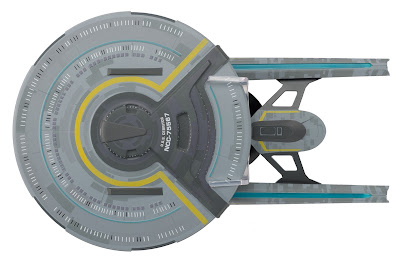 The XL Cerritos is another expected January release. So far no other ships have been announced for the Lower Decks series, so it's not yet know what regular model size will be, what frequency of release we can look forward to, or if there might be a subscription option.
From the original Starships Collection, the 29th larger special in that series will be Eaglemoss' first Klingon starbase, DS9's Ty'Gokor Station, which (as revealed in images released by TrekCore) looks like rather an imposing model! Not sure on the release window for this one just yet. 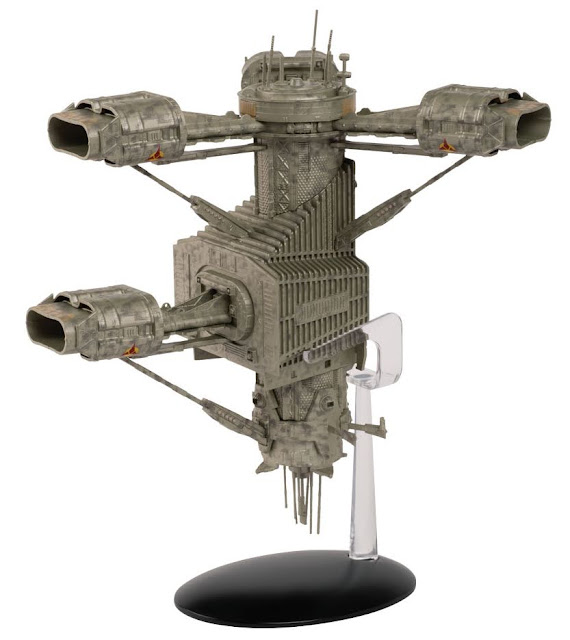 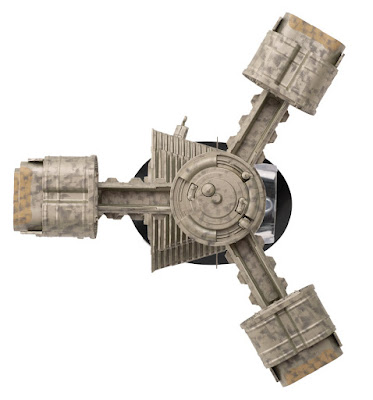 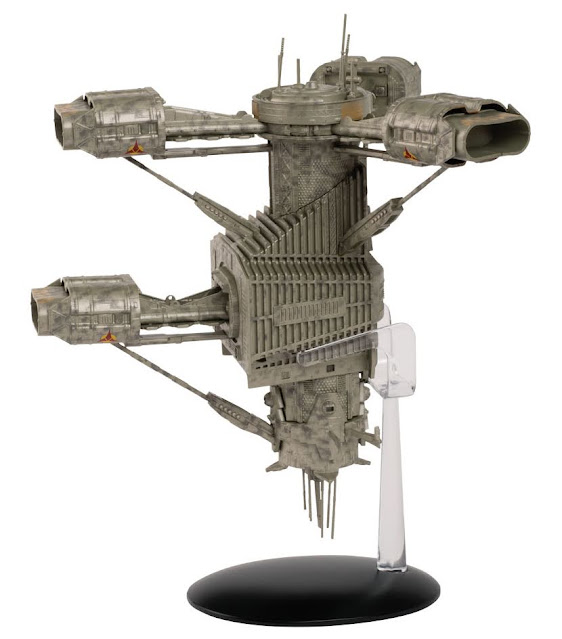 The original run has also been sort of reborn in recent months with the resumption of bonus issues given us regular extra ships at the smaller scale. Bonus #32, another January release, will be Nomad(ad), which must be the smallest in-universe thing to have earned a place in this starship(?) collection! We have lots of preview images of this now: 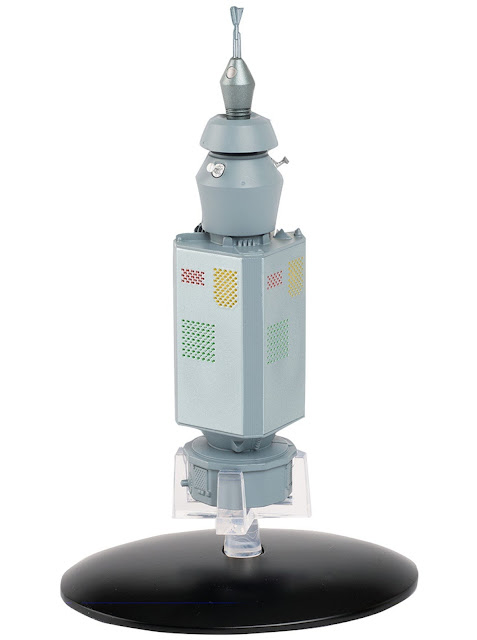 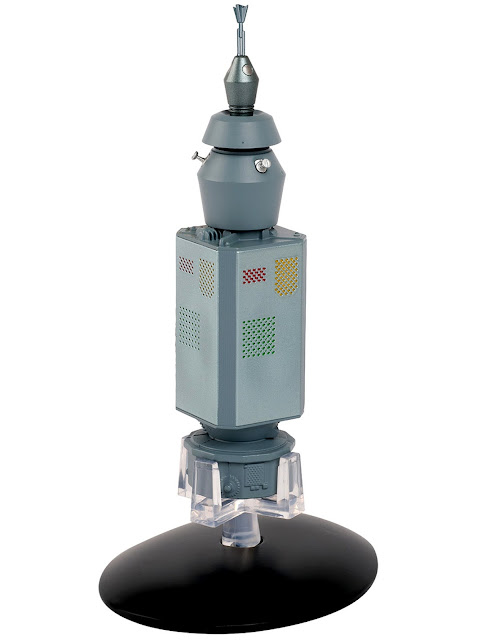 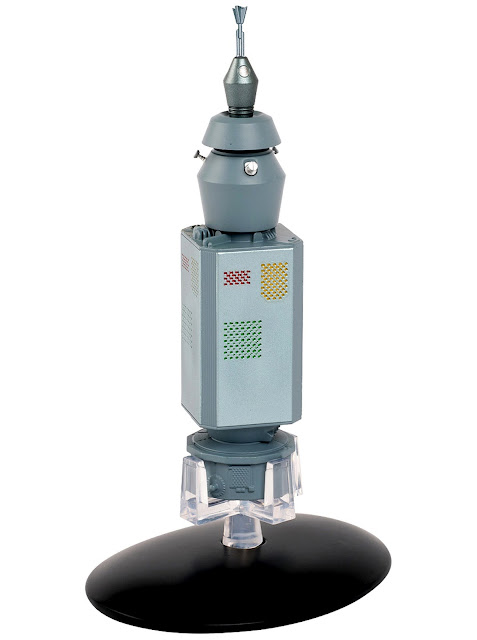 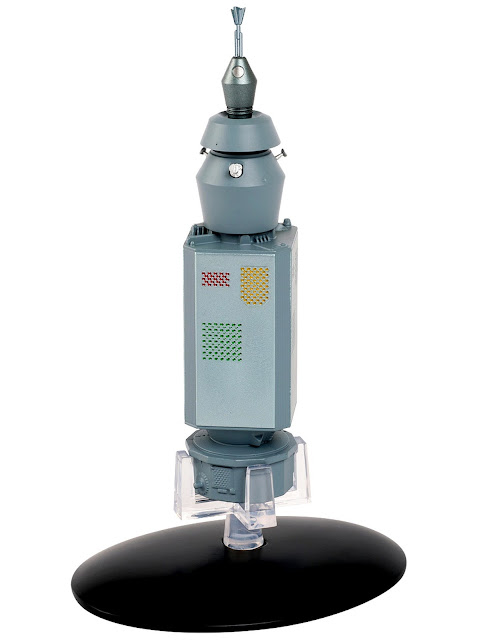 Then in February bonus #33 will be one of the more distinctive alien designs, TNG's Talarian Observation Craft(ad). Which alas looks like a terribly tiny model, but a welcome bit of alien variety none-the-less. 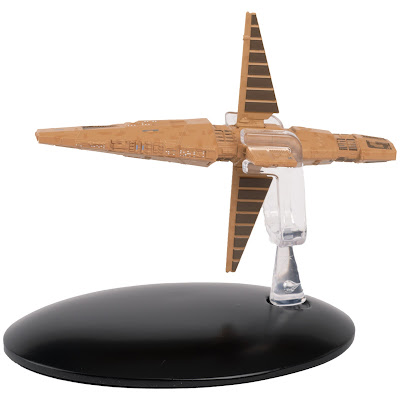 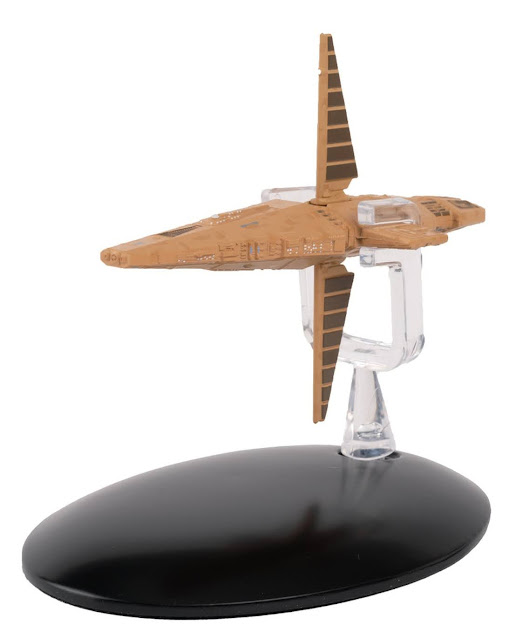 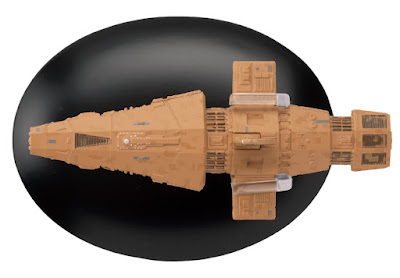 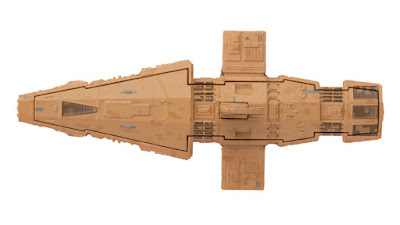 There's also some news of a couple more forthcoming bonus issues thanks to the latest packaging previews. On the way in the coming months are the delightfully odd Hierarchy Survey Ship from Voyager, and a Klingon variant, the D5 class tanker from Enterprise. 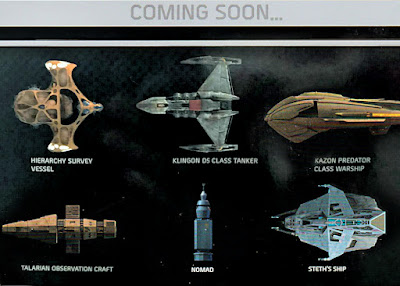 Meanwhile subscribers to the Build the USS Enterprise NCC-1701-D model kit part work(ad) have got a nice treat in the form of the first special issues in that series. They have been able to get a new shuttle set, featuring the type 6 shuttlecraft and type 15 shuttlepod, in new larger models, similar to regular starships collection ships - A notable upgrade from the previous teeny-tiny shuttlesets that Eaglemoss have used for most shuttlecraft models before. 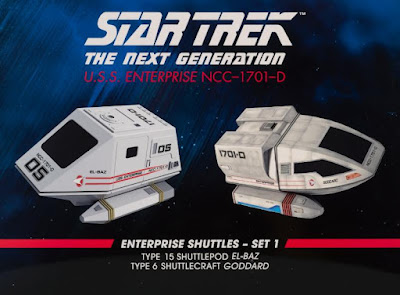 It's not known if these will also be offered on the webshop to everyone, but I certainly hope so! Build the Enterprise subscribers will expect to see more designs from the D's shuttlebay in further special releases as the series continues.
I'm not building the Enterprise myself, so have been keeping track of the series via the in depth build videos from the World of Wayne YouTube channel. Here are the latest few since I last updated on the series, including an increasingly well built out saucer, and some work on a nacelle at last:


Finally, there's news of a sort of new collection from Eaglemoss, although it's actually a reissue series. Recently launched is the Star Trek: Starfleet Starships Collection(ad), which will offer again all the Starfleet ships from the original starships collection to new subscribers (so far US only). The subscription is on the basis of two ships per month, and will run for 62 issues. 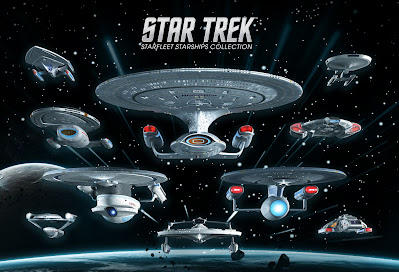 They also plan to include the Starfleet ships form Discovery, Picard, and future series, although how those larger models fit into the subscription model priced on the smaller ships is not very clear - This is a strictly reissue series, no rescales or anything like that. For anyone that hasn't collected the ships so far, and isn't into alien ships, this should be a neat way to jump in anyway.