In an infuriating last minute announcement, CBS have revealed Star Trek Discovery season 4 will not be launching on Netflix alongside the US release on Paramount+(ad) as expected, but instead will only be available in the US on Paramount+ and Canada on Bell Media services, with the rest of the world having to wait until Paramount+ launches in local markets. Past seasons of Discovery have also been pulled from Netflix with immediate effect. Here's the message to fans: 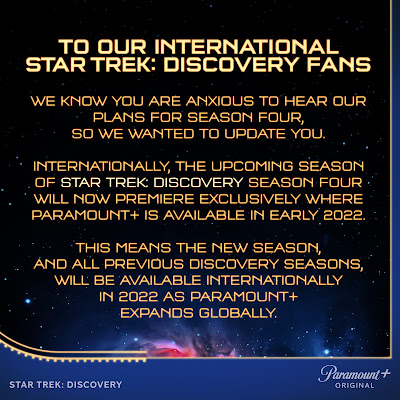 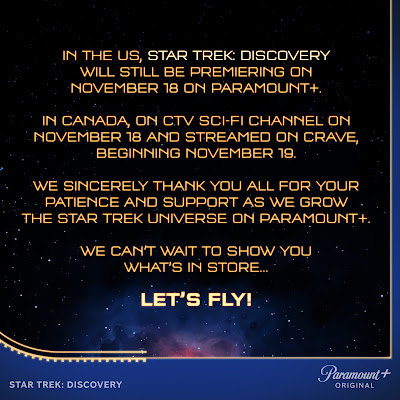 Paramount+ is already available in most Latin America countries, Nordic countries, and Australia, and oddly the new announcement does not seem to suggest those countries will immediately benefit from being able to watch the new season either. Most of Europe will be able to get it from spring 2022, so can expect to watch Discovery new and old, and Prodigy, when that happens. The situation for the rest of the world is even more frustrating, with fans in Asia and Africa left in indefinite limbo - Paramount+ is aiming to launch into about 45 markets in the next year so (in contrast to Netflix which covers very nearly every country in the world), so many countries may find themselves in a Star Trek desert for a long time to come.

As a UK fan, and a friend of fans across this globe, this is pretty shit to say the least. The new arrangement with Netflix has, accordingly to Deadline, only just been agreed - Presumably buying back whatever rights Netflix held so that CBS can fully utilise their content as they please - But the timing could not be any worse, just two days before fans across the globe were expecting to join our North American friends in enjoying a new season. This clearly wasn't the plan in the near term, as the launch of season four has been promoted as coming to Netflix internationally right up until this new announcement. Makes you wonder if either party didn't quite hope for the new agreement to play out exactly as it has done...

On behalf of the cast and crew, actor Anthony Rapp (Stamets) made a statement sharing the frustration at the situation:

I hereby reach out to our many international #StarTrekDiscovery fans, who are understandably upset at the last-minute news that you won’t get to experience Season 4 until 2022. We cast members just found out about this as well, & we share your disappointment & frustration.

I don’t pretend to understand how these sorts of deals for international rights are made (or unmade). I will say I wish we all had been told that this was coming, so we could have braced ourselves, & then we could have helped spread the word to all of you.

Having just been to Germany for FedCon, having traveled twice to DST in Birmingham, & having interacted with countless international fans on social media over the past 4 years, I am keenly aware of how much love & support our show receives from many folks from all over the world.

We remain deeply grateful to you all. We hope that when the show makes its way to you, you will continue to support the hard work that we all have done to bring Discovery to life. We are all of us saddened that you will have to wait months longer to experience Season 4.

Thank you to those of you who’ve been tweeting out your honest and passionate and heartfelt responses. We see you, we hear you, and we are committed to doing our utmost to honor you with our work. #LLAP

The silver lining of this is that CBS is obviously trying to keep their content inhouse now and avoid the current rather annoying situation of selling off each new Star Trek series to different international services; resulting in Discovery being on Netfix, Picard and Lower Decks on Amazon, and Prodigy not available at all. In future we can expect to find all new Trek on Paramount+, which is much simpler (even if it does mean signing up to another service if you have Netflix and Amazon for anything other than Star Trek), and should mean fully simultaneous international releases are possible - This has of course been the case anyway so far with Discovery and Picard, but thanks to the licensing arrangements taking too long did mean international fans had to wait a long time to catch up with the first season of Lower Decks. In future we will not have to rely on CBS and international partners working out agreements, it will all just be under CBS' control.

For the time being Picard and Lower Decks do remain on Amazon for the world outside of the US and Canada (and Latin America for Lower Decks), and all the classic Trek series are still on Netflix too outside the US - One would assume CBS would like to bring them all back under the Paramount+ international roof too, but that may depend on the particulars on the agreements they have and how much CBS are willing to pay to reverse them; it's notable that despite Parmount+ being available in Canada for some time, all new Trek keeps being secured by Bell Media in that market, so it makes one wonder if Picard and Lower Decks might also be ensnared by Amazon for some time yet, and the older Treks might have a while to play still on Netflix.

For Discovery fans outside of North America, this is an extremely annoying and frustrating week, and months to come as season four spoilers spill across the web. But at least in future we can look forward to not having wait for news of new licensing agreements when each of the new Star Trek series in development is ready for launch.

To keep track of all the latest Trek Discovery updates, check back through my Discovery tag, and for Trek-TV news in general my TV tag.