Next Picard novel is a Rios adventure, plus titles for the mysterious C trilogy

Some Star Trek novel news today, with lots of new details for the next Picard novel, and teasing titles for the mysterious trilogy until now only known as Untitled C. Continue below for all the latest.

First up, Simon and Schuster have released the title, author, cover, and blurb for the next Picard novel, John Jackson Miller's Rogue Elements(ad). As the cover makes clear, this book will help us get to known the captain of La Sirena, Cristóbal Rios: 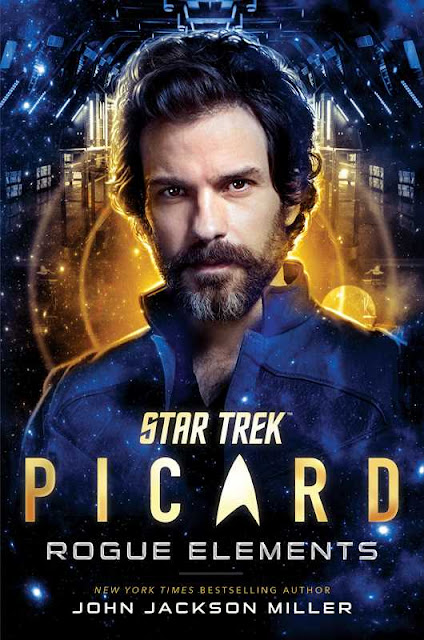 The book is set shortly after Rios left Starfleet, and sounds like a huge adventure romp. Here's the blurb:

A thrilling untold adventure based on the acclaimed Star Trek: Picard TV series!

Starfleet was everything for Cristóbal Rios—until one horrible, inexplicable day when it all went wrong. Aimless and adrift, he grasps at a chance for a future as an independent freighter captain in an area betrayed by the Federation, the border region with the former Romulan Empire. His greatest desire: to be left alone.

But solitude isn’t in the cards for the captain of La Sirena, who falls into debt to a roving gang of hoodlums from a planet whose society is based on Prohibition-era Earth. Teamed against his will with Ledger, his conniving overseer, Rios begins an odyssey that brings him into conflict with outlaws and fortune seekers, with power brokers and relic hunters across the stars.

Exotic loves and locales await—as well as dangers galore—and Rios learns the hard way that good crewmembers are hard to find, even when you can create your own. And while his meeting with Jean-Luc Picard is years away, Rios finds himself drawing on the Starfleet legend’s experiences when he discovers a mystery that began on one of the galaxy’s most important days…

This will be a hardcover release, due in August this year. Commenting on it on his blog, John Jackson Miller offered a little more context and background:

Picard viewers met Rios, whose freighter La Sirena is crewed by his multiple holographic doppelgangers, later in his career; I begin his story earlier. It’s a freewheeling odyssey into the territories made newly lawless following the Romulan disaster. Plus lots of familiar faces!

This was my “lockdown novel,” and I specifically asked both to write about Rios — and also to write a book that would be FUN, something readers could really look forward to and would enjoy. Mission accomplished! We’ll see you in August!

Certainly does sound fun; will be looking forward to this one!

Also coming at the end of the year is a new novel trilogy, until now only known as Untitled C, and listed as TNG books. Well Simon and Schuster have now updated their Online Catalog listings to reveal the titles; and they sound kind of ominous!

Dayton Ward and David Mack have previously teased at some sort of project to tie up the loose ends of the Star Trek litverse, which of course has now been pushed into an alternate timeline by the canon events of Picard which present a very different post-Nemesis future. The latest Voyager novel(ad) also left a new dangling thread in the promise of something happening with the Krenim. Surely timeline hijinks are coming?