Last year model train makers Lionel launched a range of Star Trek trains(ad), inspired by TOS and TNG, and this year they've come back with some additional rolling stock to add DS9 and Voyager to the mix, alongside more TNG releases. Continue below to check out the new additions to this O gauge collection.

First up, the Dilithium Crystals Hopper, which features an illumination effect to give them a tempting pink glow - Very tempting for citizens of the 32nd century no doubt, but this hopper is marked up as belonging to the Enterprise-D rather than P (or whichever one they're up to by then). 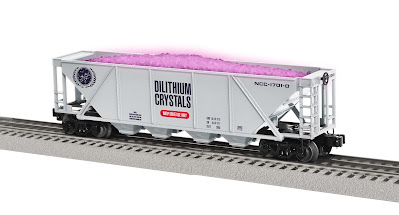 Then we have the Picard, Q, and Riker Chasing Gondola, which does kind of what it says; the three characters move around the gondola as it moves, doing laps round the cargo which comes from the Enterprise-D and Utopia Planitia Shipyards. 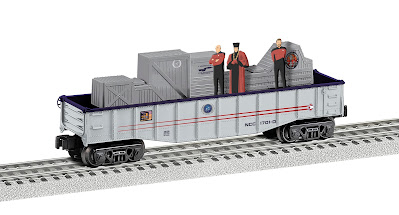 The last item in the TNG range is a tiny locamotive, the TMCC Speeder, which features a working strobe light and cabin interior, where it seems Captain Picard is in command! This vehicle is also marked up with Enterprise-D inspired details, including painted on warp nacelles. 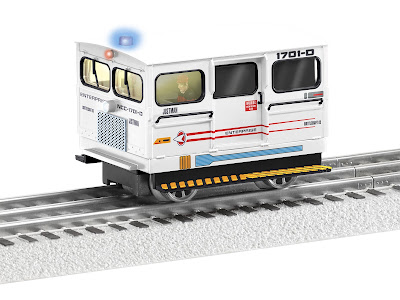 The new assortment also continues the captains series of boxcars from the first wave, with Captain Sisko of Deep Space 9, and Captain Janeway of the USS Voyager now getting their own boxcars. 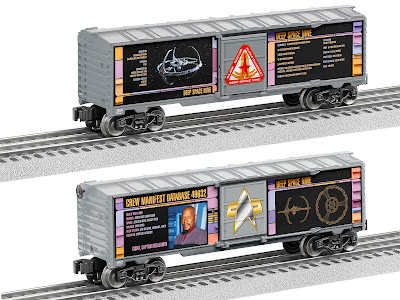 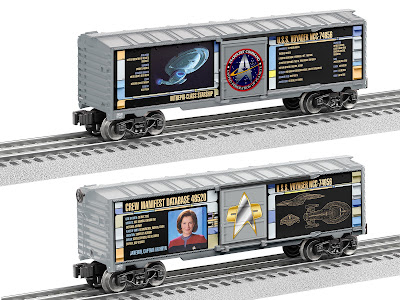 Lionel are also re-releasing their main TNG Lionchief train set this year, with an upgrade to Bluetooth 5.0, and a new voice streaming and recording feature. Otherwise it appears to be identical to the existing set(ad) (which also has bluetooth control, but I guess at an older standard?). They have released some additional photos to show off the set, including this nice gif that illustrates the novelty holodeck car well: 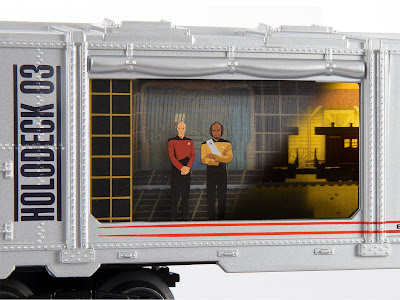 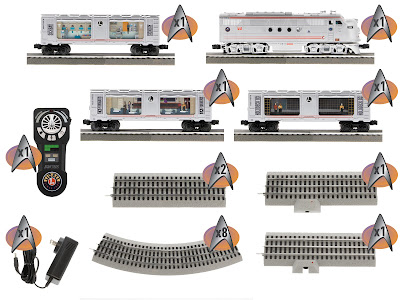 These new items are expected for release later this year, in the third quarter. They join the version 1 TNG Lionchief set(ad), a Romulan ale tank car(ad), Tribbles transport car(ad), and Kirk(ad) and Picard boxcars(ad) - See my earlier report for full details, images, and video of all those.
To keep track of all the latest Star Trek toy releases, hit the "models, toys, and games" button on my 2021 schedule page. Or check back through my toys tag for my latest reports.