What is this crazy Ferengi TNG board game from the 90s? 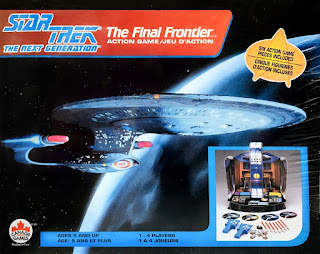 In my never-ending search for all things Star Trek I sometimes come across something completely new to me, the odd curiosity, or indeed just plain odd things. Today I would like to present my latest discovery: Canada Games' Star The Trek Next Generation "action game", The Final Frontier(ad)- Why is this odd? Because it contains tobogganing Ferengi marbles!!

I mean, just look at these things! I'm not sure if these little guys are built around marbles, or ball bearings, or just a little wheel. But however they work, that's a whole bunch of Ferengi in zooming poses rolling around on their bellies! 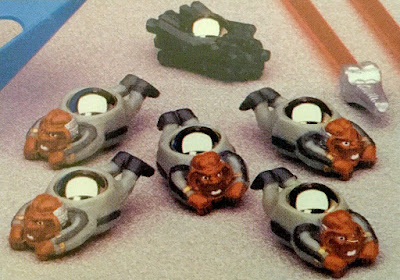 Why? Well here's the story from the game, which has a delightful opening sentence:

The Ferengi are up to their capitalist ways again. They have overrun the engineering room and are going after the energy matter/anti-matter reaction chamber. They are trying to steal the dilithium crystals to sell on the open market. These crystals are the energy system on the USS Enterprise. They would secure at least 5000 bars of gold pressed latinum for the Ferengi, and would turn the Starship Enterprise incapable of warp travel. Your mission is to defend the engineering room against the Ferengi and not let them get away with any of the crystals. Your mission is clear... Engage!

And here is the engineering room, a pretty elaborate construction for what is actually a fairly straight forward game: 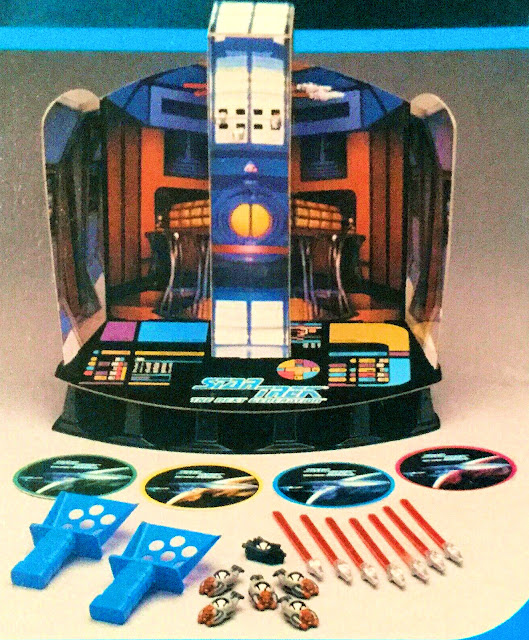 The warp core itself is a bit like the marble tower in the classic Ker-Plunk game, only it's phaser beams holding up the contents in this game, and Ferengi, plus a single rolling dilithium crystal, are what are held aloft. Here's how the game play works per the box:

How odd that capturing the prized dilithium results in losing! 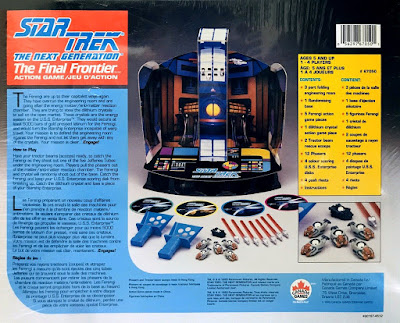 This game was released in 1993, so towards the end of TNG's run, when DS9 was still very new. I assume it didn't get much of a release outside of Canada, as there aren't too many of them popping up on the secondary market now - Curiously, on Ebay(ad), where I sourced all the images from listings of the game, every one being sold seems to be plastic sealed still; has no one actually wanted to play this whacky game?
A shame it didn't catch on, imagine what fun could be had if these flying-Ferengi were joined by rolling-Romulans and careening-Cardassians in later spin-offs... 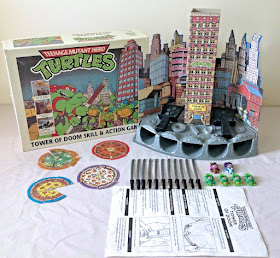 UPDATE: Turns out this Star Trek game was the spin-off itself! Thanks to some helpful tweets, I've been pointed towards the Teenage Mutant Hero Turtles game, Tower of Doom(ad), which has the exact same design and mechanic, other than obviously some different graphic design and design elements to belong in that universe.
That game was released by International Games in the US and Paul Lamond Games in the UK in 1990, so it looks like Canada Games licensed the concept and reskinned it to make this Trek game! Cowabunga dudes!