Cool Star Trek miniatures, props, and artwork up for auction from PropStore

This week PropStore are running their Treasures from Film and Television auction, which includes props, costumes, miniatures, and artwork from numerous series, including a lot of really cool Star Trek stuff. Continue below to check out the highlights.

The most eye-catching item on offer is a miniature of the refit USS Enterprise, used in The Wrath of Khan, The Search For Spock, and The Undiscovered Country. The model is used for close-ups of the engineering hull, with a battle damaged section (patched-up) on one side, and one torpedo tube. The other torpedo tube lights up rather satisfyingly, as do many oft he windows. Which you can see in action in this video:

And here's a closer look in photos: 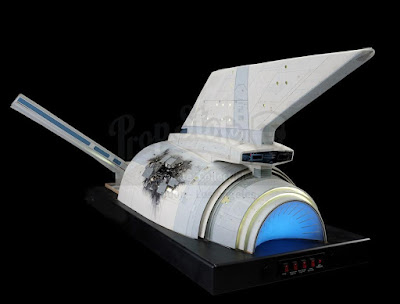 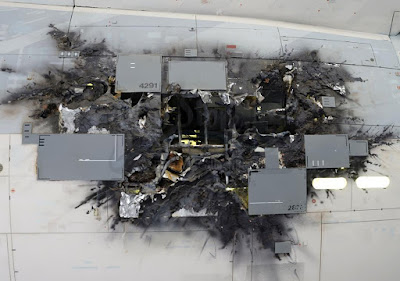 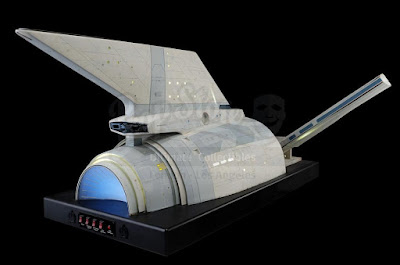 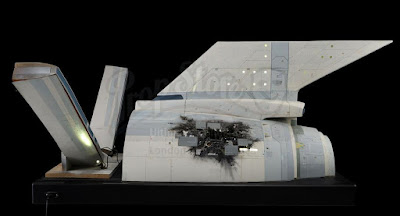 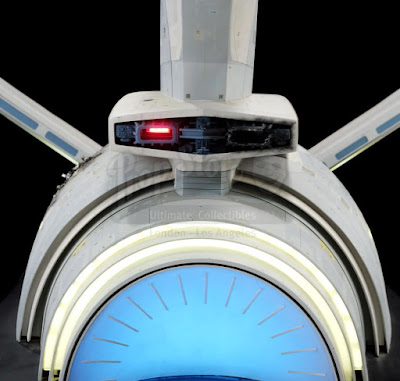 Another nice starship piece is this set of LCARS panels, the Main Systems Display for the USS Rhode Island, Harry Kim's ship from Voyager's Endgame: 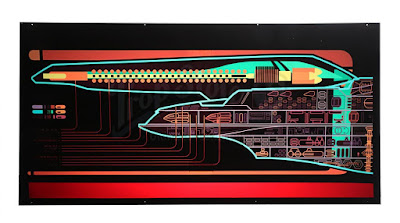 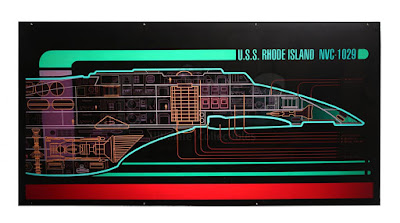 Also from Voyager, this really fun combadge prop, which pops open to reveal the interior circuitry, from the episode Coda: 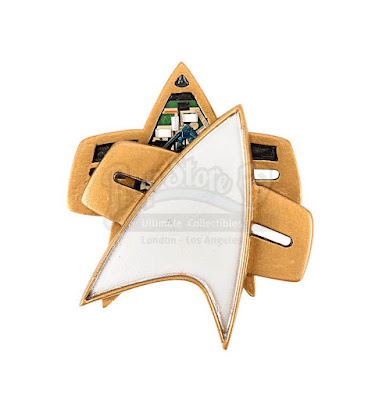 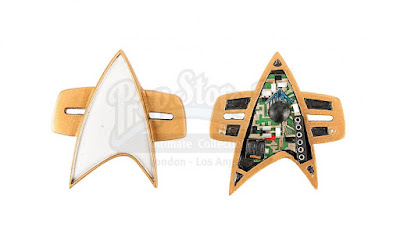 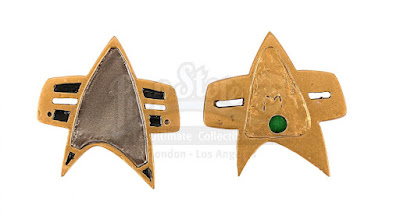 A chance for liberty for any holograms out there, you can pick up The Doctor's mobile emitter: 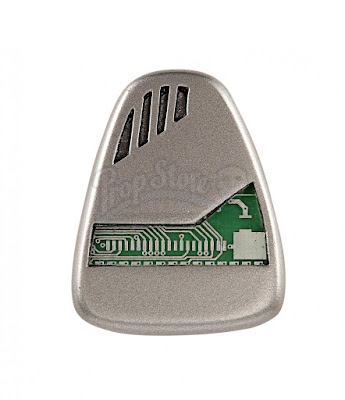 There are numerous weapon props in the auction, including this First Contact phaser rifle:

From Enterprise's Affliction and Divergence there's this very nicely made Klingon hypospray: 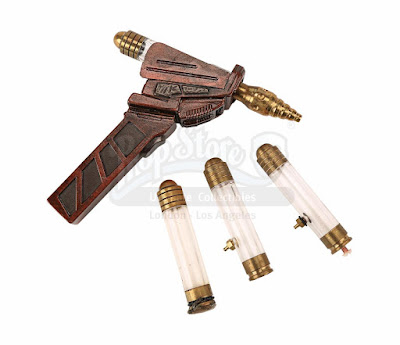 You can equip your Bajoran forces with a phaser and tricorder: 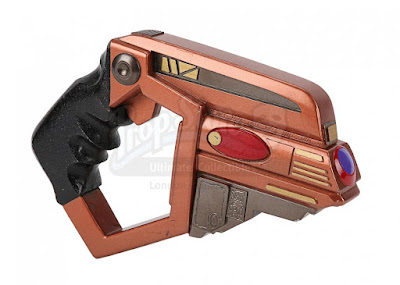 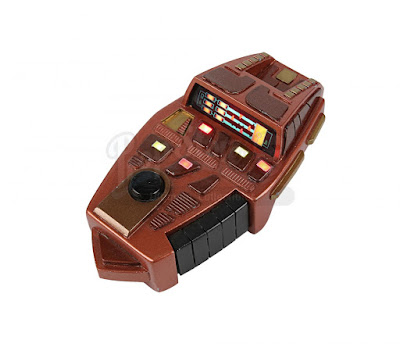 You can get hold of an entire Enterprise-D tea set, as seen in Generations: 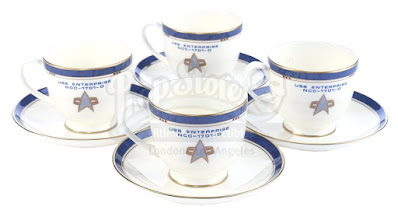 And one of the odder items, Data's arm! From the episode Phantasms: 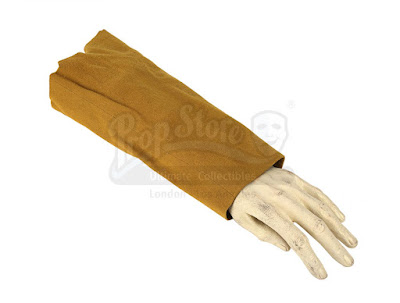 My final highlight, a set of Mariano Diaz concept art for Shinzon's costume from Nemesis: 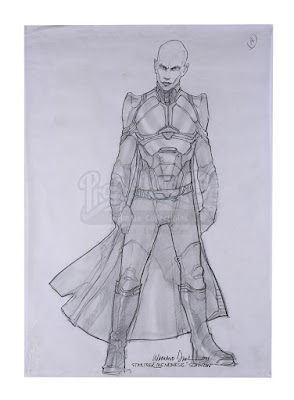 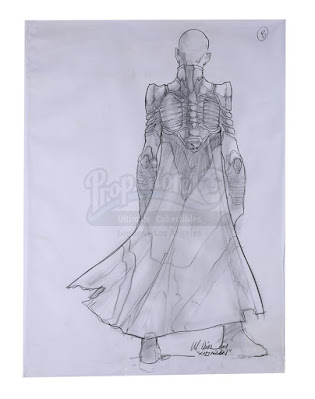 The auctions run over the next couple of days, and alongside many other Star Trek items there is also a huge range of items from other series, including Star Wars, Alien, Doctor Who, Indiana Jones, Independence Day, Stargate, and so many more - Some really cool stuff, check it all out on PropStore.
Additionally, outside of their big even auctions, PropStore almost always have Star Trek items offered up individually. A recent highlight among their Trek listings is a set of Klingon prosthetics from Star Trek Into Darkness, which is actually offered as three separate parts; the cowl that makes up most of the head, the facial features, and a set of piercings. 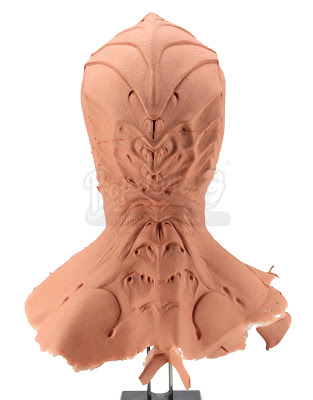 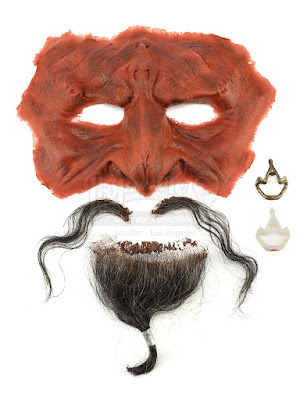 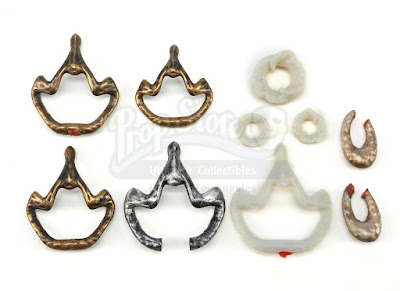 To check out more Star Trek prosthetics, props, miniatures, concept art, and more, have a look back through my behind the scenes tag, to look through previous reports.