At the San Diego Comic Con today CBS announced a whole bunch of new Short Treks episodes, and revealed some new bits regarding Discovery season three. Continue below for more:

First up, without spoiling anything, check out this awesome trailer for forthcoming Short Treks (also on Instagram if geolocked YouTube lets you down):

That's right folks, six new Short Treks are coming, some of which we knew about, some are news today! Among them are three adventures on the Enterprise with Captain Pike, Number One, and Spock joyously returning. Then there are the two animated episodes we've been hearing about for a while, and a Picard prequel episode too!

The titles given in the trailer are Ask Not, Children of Mars, The Girl Who Made the Stars, The Trouble with Edward, Ephaim and Dot, and Q and A, although we've no idea which titles go with which episodes.

Here's a couple of freshly released images from the Enterprise episodes: 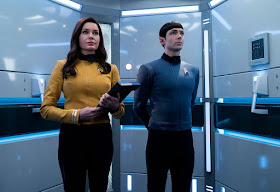 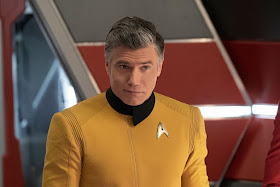 Meanwhile in the distant future (a thousand years hence), the crew of the Discovery will be getting a little lost when they arrive from their time travelling, and Burnham bumps into a someone called Book, short for Cleveland Booker. He's played by David Ajala, and Deadline describe him like this when announcing the casting:


Smart and capable, Ajala’s Book has a natural charisma and devil-may-care attitude that tends to get him into trouble as often as it gets him out.

CBS have released a bunch of images of Book and Burnham, shot on location in Iceland! Looks like she'll be meeting him as soon as she gets to the planet in her red angel suit. 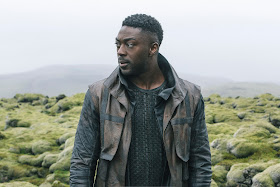 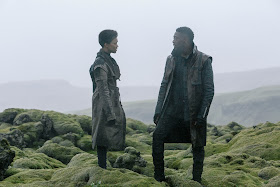 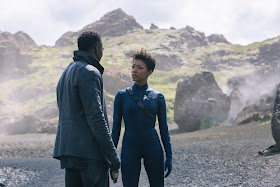 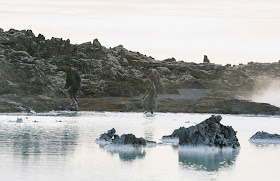 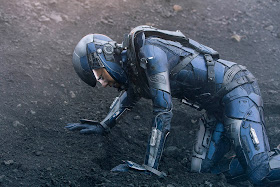 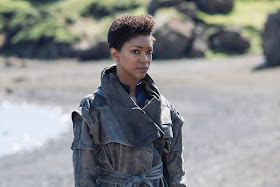 UPDATE: Here are some screencaps from the Short Treks trailer:

A new captain character seems to have a big role to play in this story, along with several other new characters:

Spock and Number One episode:

Another Vulcan, but who?

Pike and a troublesome character:

And what is this? Digital head still to come, or something very unusual?

UPDATE: Films That Rock have uploaded the entire San Diego Comic Con panel on YouTube. Check it out: