A bit of a coins catch-up today, with a look at the latest Star Trek releases from several different mints. Continue below for TV, movie, and even cat inspired pieces!

First up, Captain Kirk returns in the latest release from the Perth Mint's ongoing Star Trek collection. This latest design, from designer Jennifer McKenna, is "endorsed" by William Shatner himself, featuring the planet Saturn and several of its moons in the bridge viewscreen, which Shanter apparently has a "personal fascination" with. 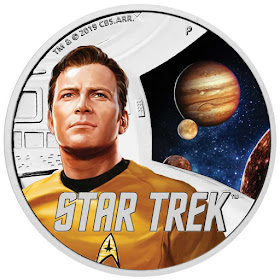 Like many previous Perth Mint releases, this coin has a face value of one Tuvalu dollar (and features Queen Elizabeth II on the other side), but made from 1 ounce of silver it retails for a rather higher price. The coin is a limited edition of 3000, and comes with its own display case. 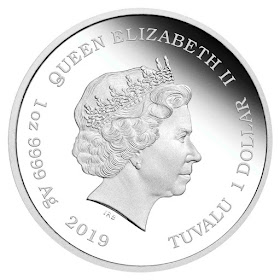 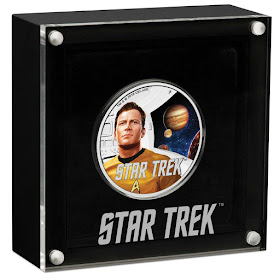 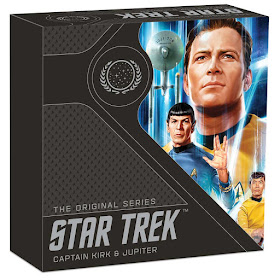 A rather more unusual coin came from the New Zealand Mint back in January, who made one of their unique coin-notes using artwork from Star Trek Cats (just the latest in the ever growing range of Star Trek Cats stuff, which already includes stamps as well!) - The design nicely uses colour only for the cats and select parts of the bridge, making them pop out from otherwise silver illustration. 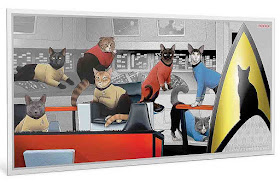 Like the above release, this has a face value of one dollar, in Niue this time, but is also made from silver (5g), so is priced somewhat more than that. This coin-note has a mintage of 10,000, and comes in a box that folds up into a little display. 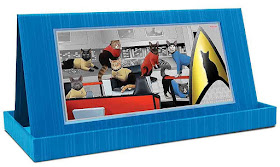 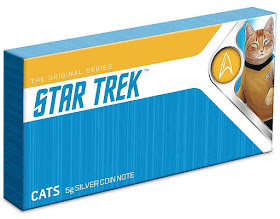 Also from the New Zealand Mint back in November is the third in their series of silver foil Star Trek movie posters, The Search For Spock. Like the designs above, this uses selective colour, with some parts, notably the ships, left in silver, giving them some pop. Unlike the above releases, this isn't a coin, just a collectible made in silver (35g). 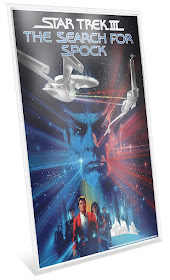 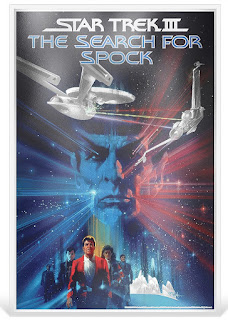 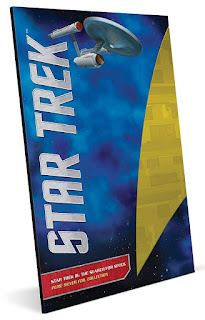 Finally, from the Bradford Exchange, we have the first in a series of  24 karat gold plated commemorative coins (with no country or face value) celebrating notable TOS episodes. The collection starts with The City on the Edge of Forever, with two colour scenes printed on one side of the coin, and the USS Enterprise on the other side.

The series, which was first offered in May, is released in a subscription format, with the next releases due to be The Trouble with Tribbles, Space Seed, and Arena, with more to follow (none of the later coins have been visually previewed) - A collector's case will come with the second release in the series. 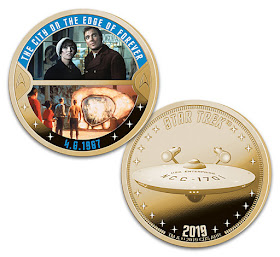