It's a new cover day, with two new covers, one for a whole new book, to show you. Continue below for those and more:

First up the much anticipated reveal of the cover for the next Discovery novel, John Jackson Miller's The Enterprise War. The book is a prequel to Discovery season two, filling us in on what the Enterprise was up to in the Klingon War. And the cover is a welcome shift in style from the previous Discovery novels, switching from character promo art to a nice poppy image of the Enterprise! 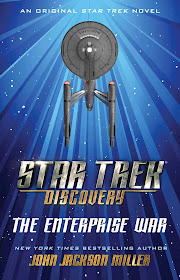 The book is due out in July. Here's a reminder of the blurb:


An all-new novel based upon the explosive Star Trek TV series!

A shattered ship, a divided crew—trapped in the infernal nightmare of conflict!

Hearing of the outbreak of hostilities between the United Federation of Planets and the Klingon Empire, Captain Christopher Pike attempts to bring the U.S.S. Enterprise home to join in the fight. But in the hellish nebula known as the Pergamum, the stalwart commander instead finds an epic battle of his own, pitting ancient enemies against one another—with not just the Enterprise, but her crew as the spoils of war.

Lost and out of contact with Earth for an entire year, Pike and his trusted first officer, Number One, struggle to find and reunite the ship’s crew—all while Science Officer Spock confronts a mystery that puts even his exceptional skills to the test…with more than their own survival possibly riding on the outcome….


The next new cover is for a whole new book! Coming in December from Running Press is Body by Starfleet: A Fitness Guide, by Robb Pearlman. This will be a hardcover release, and promises to be fully illustrated. I'm sufficiently entertained by the cover to be curious: 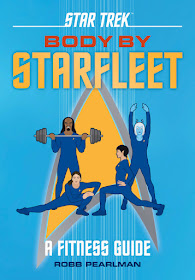 
A fully illustrated guide that bridges the nexus between stasis and health, Star Trek: Body by Starfleet provides real, practical, and fun exercises for pop culture fans of all ages and physical abilities so that they may boldly live long and prosper.

Drawing from the most celebrated and iconic elements of over 50 years of Star Trek, Body by Starfleet will provide any pop-culture (or junk-food) junkie a fun and healthy way to engage their warp core and get moving. Whether you view the gym as an impenetrable final frontier or regularly bench press boulders like a Gorn, these simple, easy-to-follow instructions -- created in consultation with a certified fitness trainer -- is for readers of all ages and fitness levels to navigate through a series of enterprising exercises.

Everyone, from an ensign in the Command Training Program to an admiral who's voyaged through every quadrant, will benefit from the more than 30 exercises featuring Klingon Calisthenics, Tribble Lifts, Chekov's Cossack Squats, Jefferies Tube Climbers, and Wesley Crushers. All of the exercises in Body by Starfleet are designed for standard gravity so they can be performed with little to no equipment everywhere from living rooms to gyms to holodecks. Also included is a chapter covering nutrition, so readers can program their replicators to eat better and cleaner, motivational quotes and moments spanning the Star Trek franchise, and special exercises aimed toward non-humanoid species including Horta and Changelings (bucket not included).


In one other bit of books news, Dayton Ward recently appeared on TrekFM's Literary Treks to discuss his latest TNG novel, Available Light. As ever this is an informative discussion on the book, giving some great insights into the hows and whys of what Dayton wrote. So worth a listen once you've read the book.