Factory Entertainment have become the latest company to take on a Star Trek license, and promise a broad variety of different products, with Star Trek entries into several of their brands, spanning toys, collectables, and homewares. Factory Entertainment's modus operandi seems to be to come up with a product concept brand and then apply different licenses to it, so Trek items in each range will sit alongside an eclectic mix including Jurassic Park, DC Comics, Game of Thrones, and Monty Python.

At the recent New York Toy Fair they displayed Star Trek items from several toy lines they have in the works, and according to their announcement, will also be offering "desktop environments" (whatever they might be), bottle openers, and wine stoppers.

Of the ranges on show, the Revos line of vinyl figurines looks most fun to me. Their defining feature seems to be that they sit upon an inverted dome base, so must wibbly and wobbly about a bit, and be able to spin, maybe even fight; as the pairing of Kirk and the Gorn seems to suggest here. There's no suggested release date for these yet. Image via Figures.com: 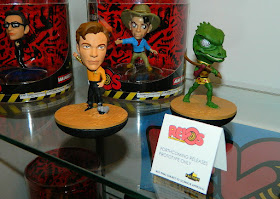 Then there's the Kuzos range, these are metal miniatures of various props (if you count a Horta as a prop!). They had on show a TOS collection, due second quarter this year, and a Discovery phaser too. Images via TrekMovie and Figures.com 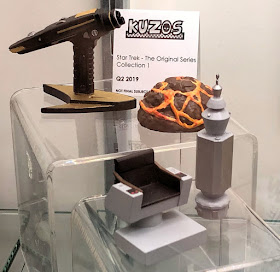 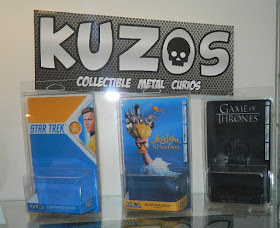 Finally for Trek, there are Pawplay cuddly toys - That's pets in cosplay, and include Star Trek characters transformed into dogs and cats. The range, due third quarter this year, will include a Kirk dog and Uhura cat for TOS, and a Picard dog, and (cute!) Data cat. Images via TrekCore: 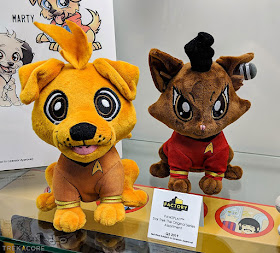 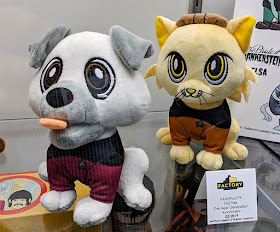 You can see further photographs of the all the products here via the coverage on Figures.com, TrekMovie, and TrekCore.

To keep up with all the latest Star Trek toy releases, hit the "Models, Toys, and Games" button on my 2019 schedule page.