IDW's Star Trek comics for May

IDW have released their solicitations for May, which include two new Star Trek comics. Continue below for all the details of those, and other comics updates:


As the last year of their original mission begins, the crew of the U.S.S. Enterprise will have to use all of the skills they’ve acquired along the way as they prepare to face the biggest challenge of their lives—a dark threat that doesn’t just threaten their existence, but the existence of the entire Federation as well...

Two covers have been announced for this one, with the main Tholian dominated cover coming from the issue artist Thompson (which you can also see on Twitter pre-colouring). A retail incentive (not yet revealed) will be by J. J. Lendl. 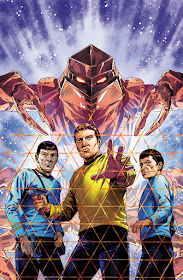 
The contest for the ages continues as the Captains race to capture the one exotic creature that Trelane is missing from his intergalactic menagerie—a Borg Queen! But as the Godlike beings revel in the games, the crews are hatching a plan of their own. Don’t miss the penultimate issue of the biggest Star Trek crossover of all time!

Three covers are on offer for this one, with both the A and B by David Messina, in this case forming a diptych. Only the A cover has been revealed in fully so far, bu Messina has previously teased the other half too. The third cover is a retailer incentive, from George Caltsoudas. 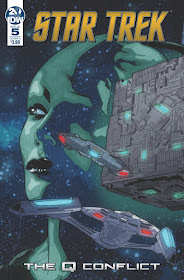 Just one other little update today, from artist Daniel Irizarri, who has teased another panel from his forthcoming work on a story in the next Waypoint anthology.