In a couple of weeks time the first Star Trek Little Golden Books will be arriving, giving us a charming interpretation of the Star Trek universe for younger readers. Two are coming in January, which I have previews of below. So continue below to check those out, plus an update on the equally nicely illustrated Kirk Fu Manual.

But first, just recently it was announced there will be a third Star Trek Little Golden Book, Too Many Tribbles. This one is due out in July; here's the cover and blurb: 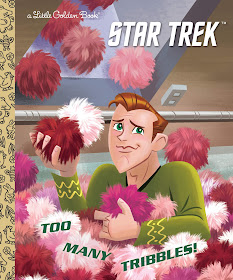 A little Eaglemoss Official Starships Collection update today, but with some really cool stuff, thanks to prototype models sent out to collectors recently.

But first, we have our first look at the twelfth XL model, and one I am especially looking forward to, the beautiful Akira class USS Thunderchild. This looks to be a nice substantial model, and has a lot more detail on the paints than the regular sized version. Interestingly it also actually has the name USS Thunderchild on the saucer (unlike the previous smaller model, which is screen-accurate for the unmarked ship on-screen). This is currently listed for February release on the US Eaglemoss webshop: 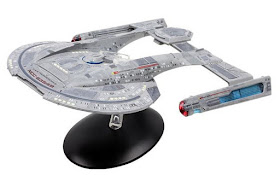 Eaglemoss have released their latest round of solicitations for The Official Starships Collection, which reveal two new issues of their regular series. We've also got lots of new images of the gorgeous Spacedock special, and Discovery updates too. Continue below for all the latest:

First up solicitations have revealed two ships in up-coming line-up for the regular series, with issue 146 being the long awaited Fesarius, from The Corbomite Maneuver, one of the first ever ships in Star Trek. It was previously suggested this was a challenging model to pull off, which one can imagine, due to the two colours and sizes of disk that cover the surfaces in triangular panels; there's a lot of small detail on this deceptively simple model. If you look closely at this image you can see some sort of impression of the triangular shapes, but it looks to be all one colour - But the colour on the solicitation images is often a bit off anyway, so let's hope the final model does the ship justice. 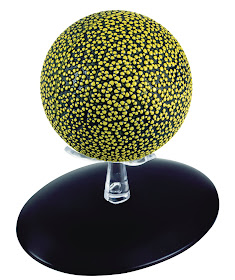 IDW have announced their March solicitations, including two new Star Trek books, plus an omnibus. Continue below for all the details, and other comics updates.


The anthology series celebrating 50+ years of Star Trek continues in this new oversized special. Featuring four all-new tales written and drawn by some of today's top creators, this new installment of the hit Waypoint Special will revisit fan-favorite characters all across the Star Trek universe.

The previous Waypoint Special was only just released, but it's great to see another volume rushing up to bring us even more creative and diverse Star Trek stories. There's just one cover for this book, by Stephen Mooney, which IDW note isn't the final version yet. From it we can at least infer this book will include TOS, TNG, and Voyager stories. 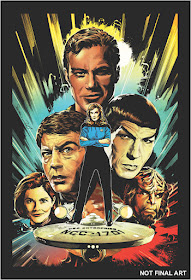 Eaglemoss have released updated covers and preview pages for two of their forthcoming Star Trek starships focused books. Continue below to check them out:

First up, the cover for the first of the new Illustrated Handbook series, featuring the USS Enterprise-D, has been updated with a different selection of images which better reflect the illustrations that will be the highlight of its contents - The book is based on the old Star Trek Fact Files, and will center around the fantastic technical and cut-away images from that magazine series. 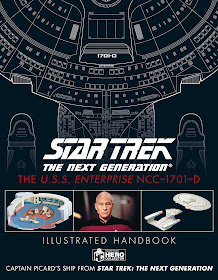 Diamond Select Toys have released new preview images of their forthcoming Star Trek action figures. Continue below to check out those, plus news of lots of reissues.

First up DST have released packaging shots of the Star Trek Select Kelvin timeline Kirk and Spock figures, which are due for release next month. These new images show off the generous range of accessories each figure comes with nicely! 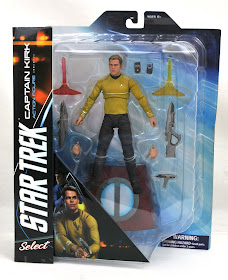 This week brings us the return of IDW's anthology comic series Waypoint, in a new "special" format, featuring multiple stories in a one-off book (rather than the previous two stories per book miniseries format).

We are treated to four stories spanning the 23rd and 24th centuries:


Josh Hood also created the cover, which spans all four stories, which was coloured by David Garcia Cruz. Continue below to check out a five page preview of the Ezri story: 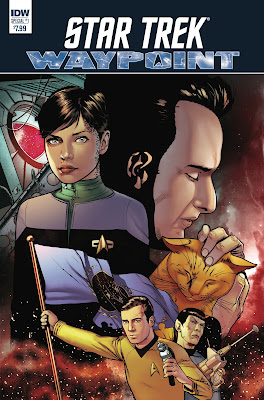 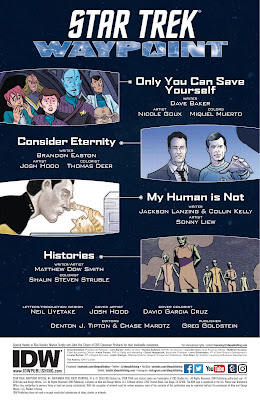 Bye Bye Robot have revealed their latest range of Star Trek art prints, with seven new pieces from two returning artists offering up something for every classic Star Trek series. Continue below to check them all out.

First up from Mark Brayer we have two new prints, the first here is a continuation of his retro starship series, featuring the Klingon Bird of Prey, specifically the HMS Bounty, which is also the title of the piece, flying over Vulcan. 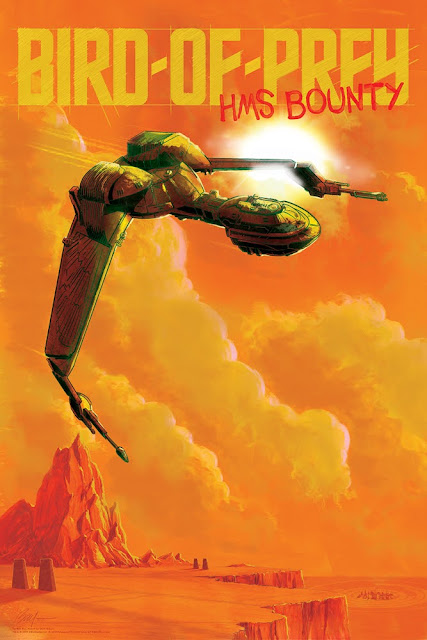 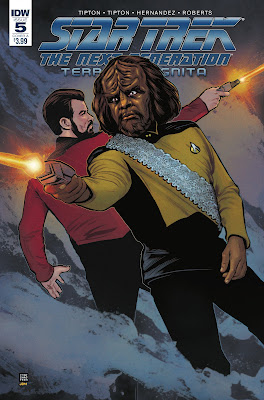 Out this week is the penultimate issue of Terra Incognita, IDW's mirror universe tinged TNG comic, which this issue gives us some pleasingly alien aliens. Those come from writers Scott and David Tipton, and Angel Hernandez continuing on art duties this issue.

The book is offered in four different covers from the same gaggle of artists as previous issues. The A cover from Tony Shasteen (coloured by JD Mettler) features Worf and Riker. The photomontage B cover meanwhile also features work, but this time paired with Doctor Crusher. The same duo feature on J.K. Woodward's retail incentive cover, in a much more menacing scene. And once again Elizabeth Beals gives us something more intimate and everyday on the Enterprise, this time featuring Picard, Geordi, and Wesley Crusher, doing, something...

This week brings us the third issue of IDW's Star Trek vs Transformers crossover comic series, and the crossover potential is really paying of this time, with a particularly killer final page! As ever the book is penned by Mike Johnson and John Barber, with art from Philip Murphy.

Three different covers are available again, with Philip Murphy once more providing the A cover, this time featuring a whole gaggle of characters. The B cover by Gavin Fullerton has several Starfleet characters, but just one Transformer towering over them, but the best of the bunch is surely Megan Levens' (coloured by Charlie Kirchoff) featuring the female characters from the series, with a particularly majestic looking M'Ress.

Continue below to check out all the covers, plus a five page preview: 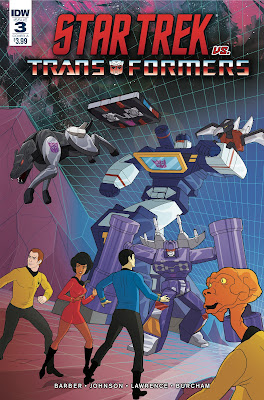 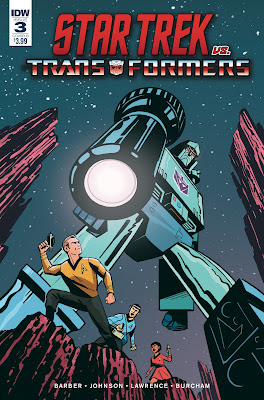 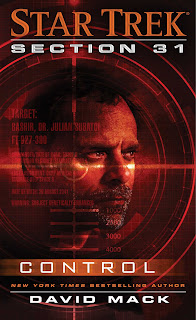 First up, while talking to Literary Treks (TrekFM's Star Trek books podcast), David Mack has revealed he is working on a new (presumably TNG) novel, with the working title Collateral Damage - This will be a follow up to his last TNG-era novel, Section 31: Control, which of course saw Section 31 unravel and implicated numerous members of Starfleet in the centuries long conspiracy, including Jean-Luc Picard, for his part in the cover up of a presidential assassination - The latter action occurred in a much older book, A Time to Heal, which was subject of the podcast discussion. Mack ominously laid out what awaits Picard as a result:


Eventually the truth does come out, and Jean-Luc Picard is going to have to face the music.

He also hinted that the book will explore the fallout from his Borg invasion trilogy, Destiny:


Even though we think all is well all these years later, the level of damage and devastation that was done by the Borg continues to have its effects and to take its toll on Alpha Quadrant society.