Star Trek novels have been regularly released every month for years, but lately the line has ground to a halt due to issues with the license renewal. But finally there is news of new Star Trek books coming! Via a panel at this week Star Trek Las Vegas convention several new books have been announced for release in 2019:

January will relaunch the novels line with the fourth Discovery novel, The Way to the Stars, by Una McCormack, which will focus on Sylvia Tilly and explore her background. We also have a cover and blurb for this one, via StarTrek.com: 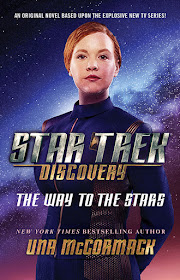 Despite being an inexperienced Starfleet cadet, Sylvia Tilly became essential to the U.S.S. Discovery finding its way back home from the Mirror Universe. But how did she find that courage? From where did she get that steel? Who nurtured that spark of brilliance? The Way to the Stars recounts for fans everywhere the untold story of Tilly’s past.

It’s not easy being sixteen, especially when everyone expects great things from Tilly. It’s even harder when her mother and father are Federation luminaries, not to mention pressing her to attend one of the best schools that the Federation has to offer. Tilly wants to achieve great things — even though she hasn’t quite worked out how to do that or what it is she wants to do. But this year, everything will change for Tilly, as she about to embark upon the adventure of a lifetime — an adventure that will take her ever closer to the stars…

We will then have a little wait, before the next book in March. That's when we're getting The Antares Maelstrom, by Greg Cox, a TOS book, which was of course inspired by the mention of said maelstrom in Wrath of Khan. Here's the blurb:


Baldur-3 is an obscure planet just beyond the outer fringes of Federation space, until a group of struggling colonists discover vast quantities of the energy source pergium beneath the planet’s surface. An old-fashioned “gold rush” is now underway—a chaotic situation, as neighboring planets and space stations are vastly ill-equipped to deal with the flood of vessels and aliens competing to get to the planet in time to stake their claims. Although Baldur-3 isn’t technically under Federation jurisdiction, Captain James T. Kirk and the crew of the Enterprise are soon diverted to deal with the crisis . . . one which lies on the other side of the dangerous area of space known as the Antares Maelstrom.

April then brings us Available Light, a TNG book by Dayton Ward, which will follow up on the recent Section 31 books, and as TrekCore reported from the panel, also connect back to the A Time To... series in some way. And we've got the blurb for this too:


As fallout from the exposure of the “Control” AI security program and the unchecked crimes of Section 31 spans the entire Alpha Quadrant and ultimately reaches the halls of Starfleet Command, the admiralty must decide what the consequences will be for their own… including Captain Jean-Luc Picard, who helped bring down a Federation president and violated the principles of his oath. Meanwhile, deep in the unexplored section of space known as the Odyssean Pass, Picard and the Enterprise crew must put aside personal feelings on the matter and distant political concerns as they investigate the mystery a centuries-old massive spacecraft adrift in the void and under attack from marauders looking to claim the ship for themselves—and armed with weapons that are evenly matched with Starfleet’s finest…

More novels are also in planning, including specifically more TNG, but no further details have been revealed about those yet.

In other books news: Two Star Trek books in the Little Golden Book series were recently announced, but we had only seen the cover for the Kirk book. Well now StarTrek.com have also revealed the cover for the other book, I Am Mr. Spock, which looks like this: 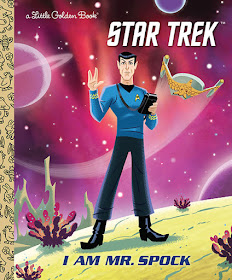 The book is written by Elizabeth Schaefer, with illustrations by Ethen Beavers, and is due out in January.


To keep track of all the latest Star Trek book releases, hit the books button on my 2018 and 2019 schedule pages. You can also find series reading lists and author bibliographies on my dedicated Star Trek lists site.