Entertainment Weekly have revealed a couple of new images from season two of Discovery; the first stills from the season in fact. Among them we get our first look at the first Saurian to come to on-screen Star Trek since the species was introduced in The Motion Picture. 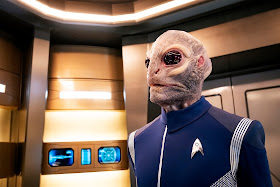 Our new Saurian is a science officer called Linus, and the image comes from the San Diego Comic Con edition of Entertainment Weekly, which TrekMovie were good enough to scan this image from.

UPDATE: CBS have now released higher quality versions of the two new images, and revealed Linus is played by David Benjamin Tomlinson, who played a couple of Klingons in season one.

We have seen a glimpse of this character before, in the make-up chair, in the previously released video to mark the start of production of season two. 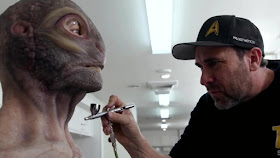 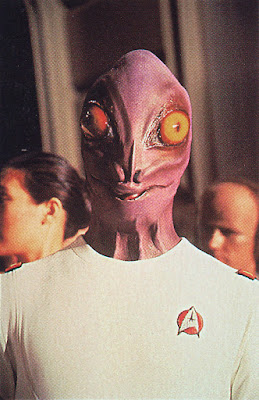 This looks like a really great update of The Motion Picture design, retaining the general feel while giving the Saurian a bit more texture in its new scaly skin. Alas the bright yellow eyes and purple skin have been toned down a bit in translation!

A second image has been released online as well as in print, so we can see this shot of Burnham in all it's crispy clear glory. Notably it is captioned "Season Premiere: 2019", so I guess that confirms we shouldn't expect any episodes to arrive this side of new year! 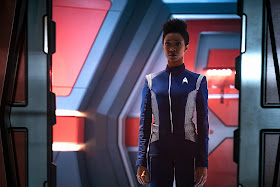 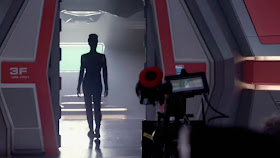 This shot is also a little familiar; it appears to be the reverse of what was seen in the aforementioned video, where Burnham seems to be entering Spock's quarter's on the Enterprise. Surely we're going to be meeting Spock as well as Captain Pike this season; Sonequa Martin Green's comments to Entertainment Weekly certainly hint at more exploration of her relationships:

In other season two news, Deadline recently reported on a few more changes behind the scenes: James Duff has joined the series as an executive producer, as part of a more wide-ranging development deal he has signed with CBS TV Studios. Duff is the creator of long-running series The Closer and its spin-off Major Crimes, and his other previous TV credits include writing Enterprise's Fortune Son.

Olatunde Osunsanmi, who directed two episodes of season one, and was co-executive producer, has been upped to executive producer and will also work on set producer/director during season two. And Writer Jenny Lumet apparently initially joined the series this season as consulting producer has now become a co-executive producer! Lumet's previous credits include writing Rachel Getting Married, and a story credit on the latest reboot of The Mummy.


For an overview of the series so far, including behind the scenes coverage, and details of tie-in products, visit my Star Trek: Discovery guide page. Or for details of each episode, including links to previews and reviews, see my episode list.