Star Trek Online and Mixed Dimensions have now launched their new 3D printing service, allowing STO players to get a physical model of their favourite ships from the game, exactly as they have customised them. 500 or so different ships are available, in who knows how many variations of designs once players have switched out parts and tweaked the paint jobs to their heart's content. 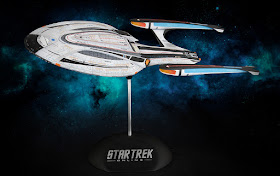 As previously reported, the ships will be available in either plain primed version to paint yourself, a single solid colour finish, or a fully hand painted finish complete with custom decals. Those range from $200 to $350, for a twelve inch model.

Here's a little video preview too.

There are plans for twenty of the most popular designs to also be available to print without having to export from STO (so if you don't play you could still grab a model of a popular ship). Which ships these are haven't been announced yet, but one imagines will surely include the USS Enterprise-F pictured above.

A handful of ships are not available. It was previously suggested these would be due to issues recreating some ships in real life (not existing in zero G). Although I suspect there are also licensing issues in effect, as among the not available list are all the Discovery ships in the game so far: The Crossfield class, Walker class, and Sarcophagus ship.

Other Starfleet ships not available are the Vesta class, Delta class, and Jupiter class. And then there are several ships from particular races not happening either, the Herald Baltim, Quas, and Vonph. The Na'Kuhl Acheros, Daemosh, and Tadaari. The Sphere Builder Arehbes, Denuos, and Edoulg. Finally the Son'a Collector, and Tholian Tarantula are also not available.