Duolingo, a language application designed around gamifying language learning, has added a Klingon language course. The app looks like a fun way to learn any language, and it's free! Also they released this cute bit of artwork to announce the new Klingon option: 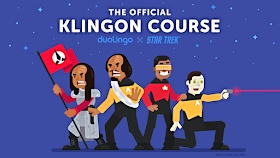 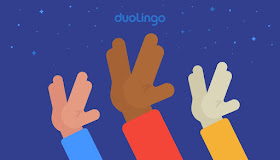 While the course is a licensed product, Duolingo is built upon the work of volunteers, so it took some time for them to put the Klingon course together. As they told Engadget:


On our end, it took some time to find Klingon experts who could commit the time and effort to creating a full-fledged course, as we wanted the course to be substantial and cover a lot of ground

There were also some technical issues thanks to the quirks of Klingon:


Klingon uses apostrophes in the middle of words, which is not something our system was able to handle at first, since no other language does it

Klingon also has case sensitivity, which means that a word can take on different meanings if it's capitalized or lowercased.

Here's a little video explaining how the app works generally: