A few book updates today, with news of the latest audiobooks and covers for forthcoming Discovery, Voyager, and Prometheus books.

We'll start with the first look at the cover for the third Discovery novel, James Swallow's Saru book, Fear Itself. A little oddly the cover has been revealed thanks only to listings of the audiobook on Amazon/Audible, which does mean this is the square format audiobook edition of the cover - The print version will most likely be the same sort of thing, but maybe slightly rearranged to crop it into the portrait shape. 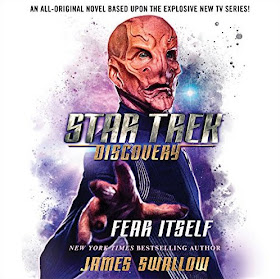 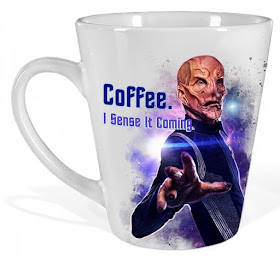 The image of Saru used to make the cover, complete with the spacey white background, has also been used to make a mug available from the Star Trek Shop (which disappointingly references coffee rather than salty tea!), so you can get a matching book and mug set if you really want!

Fear Itself is due out in June, and here's a reminder of the blurb:


Lieutenant Saru is a Kelpien, a member of a prey species born on a world overrun by monstrous predators…and a being who very intimately understands the nature of fear. Challenged on all sides, he is determined to surpass his origins and succeed as a Starfleet officer aboard the U.S.S. Shenzhou. But when Saru breaks protocol in order to prove himself to his crewmates, what begins as a vital rescue mission to save a vessel in distress soon escalates out of control. Forced into a command role he may not be ready for, Saru is caught between his duty and the conflicting agendas of two antagonistic alien races. To survive, he will need to seek a path of peace against all odds, and risk compromising the very ideals he has sworn to uphold….

While we're waiting for Saru to take the spotlight, here a bit of Lorca action in the latest excerpt from the previous Discovery audiobook, Dayton Ward's Drastic Measures:

Another audiobook on the way is the latest Kirsten Beyer Voyager novel, Architects of Infinity, the physical versions of which are already finding their ways to bookshelves, and the ebook and audio due out tomorrow. Here's the audiobook cover, which is cropped shorter, but slightly wider, than the print edition: 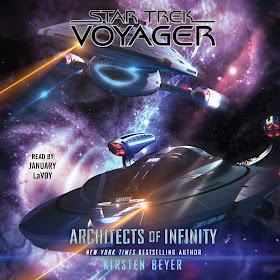 I was a little surprised to find their even is an audiobook edition of this book, as it wasn't initially listed as having one. Perhaps this indicative of Simon and Schuster edging towards audio releases for all Star Trek novels now, as half of last year's books got audio editions, and every novel since September now - That's assuming there will be any more, we're still waiting to hear what's going on with the license renewal that is currently preventing any Star Trek novel releases beyond those mentioned in this article.

Anywho, this particular edition is read by January LaVoy, and is a release of note for Voyager fans, as it's the first audiobook for the series since Pathways, in 1998! Here's the blurb:


As the Federation Starship Voyager continues to lead the Full Circle Fleet in its exploration of the Delta Quadrant, Admiral Kathryn Janeway remains concerned about the Krenim Imperium and its ability to rewrite time to suit its whims. At Captain Chakotay's suggestion, however, she orders the fleet to focus its attention on a unique planet in a binary system, where a new element has been discovered. Several biospheres exist on this otherwise uninhabitable world, each containing different atmospheres and features that argue other sentient beings once resided on the surface. Janeway hopes that digging into an old-fashioned scientific mystery will lift the crews' morale, but she soon realizes that the secrets buried on this world may be part of a much larger puzzle—one that points to the existence of a species whose power to reshape the galaxy might dwarf that of the Krenim.

Meanwhile, Lieutenants Nancy Conlon and Harry Kim continue to struggle with the choices related to Conlon’s degenerative condition. Full Circle’s medical staff discovers a potential solution, but complications will force a fellow officer to confront her people’s troubled past and her own future in ways she never imagined…

One final cover today comes from Titan Books, and their English language editions of Bernd Perplies and Christian Humberg's Prometheus trilogy (originally released in German). Here's the cover for the final book in the series, In the Heart of Chaos, which like the other books in the series, just slightly tweaks the original German cover design. 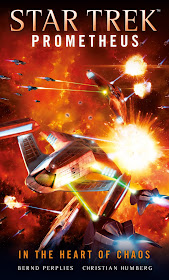 The Federation races to discover the culprits of several terrorist attacks, sending their flagship, the USS Prometheus, to stop war breaking out in the galaxy.

The situation in the Lembatta Cluster is deteriorating rapidly. Fleets from the Federation and Klingon Empire are heading for the borders. The crews of the U.S.S. Prometheus and I.K.S. Bortas are racing against time to break the cycle of violence that is spreading through the Alpha Quadrant. Adams and Kromm are on the trail of a secret weapons facility, but instead discover an enemy from their pasts who seems utterly unstoppable. Together, they search for the answers to their questions, before the galaxy goes down in flames.

To keep track of all the latest releases, hit the prose or books buttons on my 2018 schedule page. You can also find series reading lists and author bibliographies on my dedicated Star Trek lists site.