At the Wondercon Convention today a Star Trek: Discovery panel premiered a new bonus scene from the final episode of Discovery, giving us more than a hint of where we might next see Emperor Georgiou, and confirming what many have speculated about those mysterious black Starfleet badges. Check it out (US geo-locked stream):


Or the Netflix version:


I wonder where this would have fit into the episode? Maybe it was a post-credits moment, which it has now effectively become. Hopefully it's release now is indicative that they plan to bring back Georgiou sooner rather than later. Btw, the Section 31 agent, Leland, is played by Alan Van Sprang, and it seems we can expect to see more of him.

Here are some new stills from the scene too: 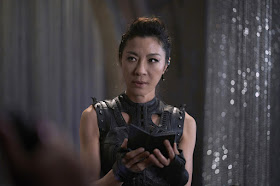 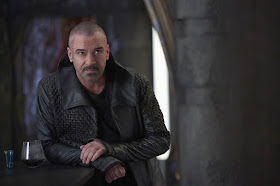 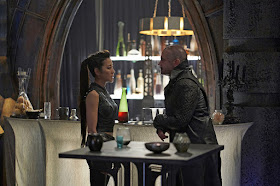 A few other season 2 pointers came out of the panel, including executive producer Aaron Harberts on meshing Discovery with the rest of Trek (via Star Trek Twitter):

We ended the season with the Enterprise and we know what those uniforms look like...so I’ll leave it at that

Prior to today we've had a few other hints at what's ahead via other interviews recently. Herberts summarised the general move to new themes for season two, away from the war arc, while talking to Entertainment Tonight:


Chapter 1 of this novel was war, and right now, we're thinking about Chapter 2. One of the themes we continue kicking around is the conflict between science and spirituality, and that's something that we're very interested, particularly after you finish a war. How do you rebuild yourself? What's required for that? What we're most excited to do is to continue thematic exploration and philosophical exploration and debate, and these characters are perfectly primed to carry storylines like that. That's one thing that we're thinking about. We have a few things up our sleeve, but we'd be lying if we knew everything, because that's the fun of it is as well. You go into it, you see what's working and you see what's interesting, and you build from there.

He also made an interesting point to about how little we really know Captain Pike:


The thing to consider about Captain Pike is, from an audience and writer's point of view, there is something very exciting about a key character from [Star Trek: The Original Series] who's only been explored in two episodes of the original series -- three if you consider how [the rejected pilot for the original series] "The Cage" works into the puzzle in TOS. When we think about the idea of Captain Pike, it opens up some large possibilities. We will never say never to exploring him a little bit more.

Getting into other specific characters, speaking to Entertainment Weekly, Alex Kurtzman, another executive producer, mentioned we should expect to see more of Tyler next season:


Tyler/Voq has had a major evolution over the course of the season, and we love Shazad. He’s capable of absolutely everything we throw at him, and we have great plans for his character in season 2.


We have just begun to tell the love story between Culber and Stamets, so I would just say hold tight.

Actor Wilson Cruz put that a little more Lyrically to the Television Academy:


Aaron and Gretchen explained what was gonna happen and told me I was part of the story for next season. This is a longer, epic love story and this is just a part of that that we have to do in order to tell it. I know what that story is and as an actor, I'm really excited about it. But even as a viewer, I think that's gonna be fun to watch!

At any rate, the production team have certainly been busy making plans recently. Here they all are: The writing team, plus prop master Mario Moreira, costume designer Gersha Phillips, and production designer Tamara Deverell (via Twitter): 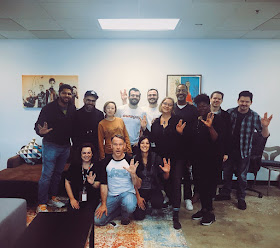 For an overview of the series so far, including behind the scenes coverage, and details of tie-in products, visit my Star Trek: Discovery guide page. Or for details of each episode, including links to previews and reviews, see my episode list.