IDW have released their solicitations for June, which include two new Star Trek comics, continue below for all the details, and other comics updates.


Now it can be revealed! This miniseries, centered on the Mirror Universe of Star Trek: Discovery, delves deeper into the characters you only thought you knew…

The book will be available in four different covers, with the A cover by issue artist Angel Hernandez, and the B cover a photo-cover featuring Michael Burnham. There will also by two retail incentive covers, one by Yoshi Yoshitani, again featuring Burnam, and the other the latest in the series of ships cover by Declan Shalvey and Jordie Bellaire. The two Burnham covers are the only ones so far released: 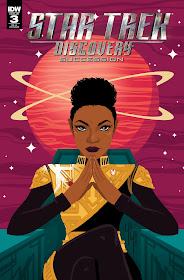 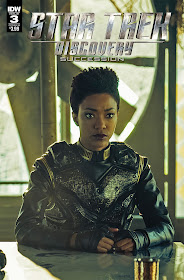 While we don't yet have the new Declan Shalvey and Jordie Bellaire cover to enjoy, Shalvey did recently share on Twitter his artwork (sans titles) for the most recent release in that cover series, the cover for The Light of Kahless #3, which features the Klingon Cleave Ship: 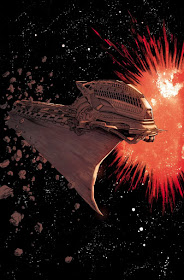 
Kirk and his crew venture into the past, only to discover it is nothing like what their history books teach—no trace of the devastation of World War III and the Eugenics Wars. What can have caused such a divergence? The answer is to be found in “An Unexpected Yesterday."

Gary Seven and the Guardian of Forever? This could be fun. Just one cover for this one, as is typical for this series: 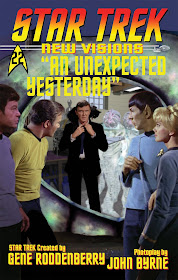 John Byrne recently revealed on his forums that the New Visions series will soon be coming to an end. But we can expect two more issues still to be solicited:


Issue 24 will be my last of NEW VISIONS, at least on anything like a regular schedule. Paramount is allowing me to bow out with one last big itch scratched.

It's been an amazing amount of fun, but I've felt this coming for a while -- especially since my 26 total issues equate to a full "season".

Twenty-six in total presumably includes the original one-shot annual that launched the series, and the one-off The Cage adaptation. Byrne did later add that there remains the potential to revisit the format in future specials:


There is a chance I may do occasional Specials, if I can hatch appropriate stories.

UPDATE: It now seems that #22 here will in fact be the final issue of the series, albeit with one further special still planned:


So...... it looks like I'll be wrapping up with 22 instead of 24. Not final, yet, but my frustration over finding an appropriate 23 was growing to migraine levels.
Plus, this will make packaging the trades easier.

What I'd already started for 24 will now become a "special". 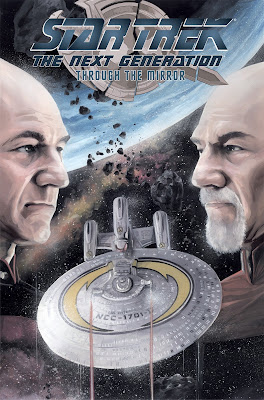 Finally, we have news of the latest omnibus, via Amazon who now list the the next mirror universe TNG series, Through the Mirror, as due for release in October, following the weekly release of the five-part series in May.


The Mirror Universe Next Generation crew is looking for new worlds to conquer, and they're crossing over to the Prime Star Trek Universe to find them!

When the Enterprise-D discovers a burned-out, pillaged Andorian vessel, the search for the culprits behind it leads to some startlingly familiar faces. But, how did the Mirror Universe crew find their way to ours, and what does Emperor Spock have to do with it? Plus, it's interstellar espionage aboard the Enterprise-D when the Mirror Universe crew infiltrates Captain Picard's ship!