Heritage Auctions are hosting an auction of entertainment memorabilia, with bidding due to start in a few days. Among the items are numerous Star Trek lots, including the artwork from the 50th anniversary travelling exhibition 50 Artists 50 Years, which CBS have been keen to promote in a recent press release.

But that's just one categories of Star Trek stuff available, the auction also features a host of Star Trek production artwork, props, costumes, and other behind the scenes bits and pieces, from most of the TV series and several films! Continue below to check out some of the highlights.

The stand-out lot for me is one of the mock-up models for the Ken Adams/Ralph McQuarrie concept USS Enterprise developed for the unmade movie Planet of the Titans. This ultimately appeared on-screen as a background ship a couple of times, but more importantly it was of course the inspiration for the design of our newest hero ship, the USS Discovery: 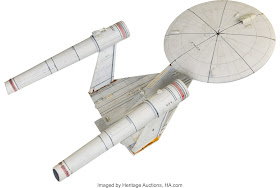 From Voyager we have a concept model, by Dan Curry, for the Borg Unicomplex: 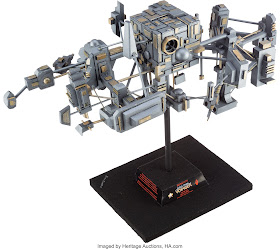 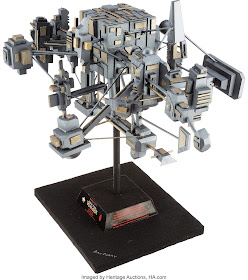 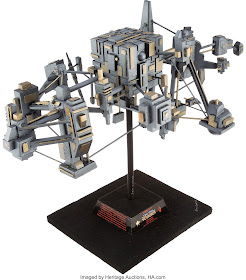 And then there are some really cool early TNG props, like these parasites from Conspiracy: 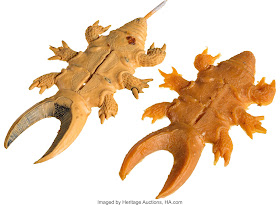 And the Echo Papa drone from The Arsenal of Freedom: 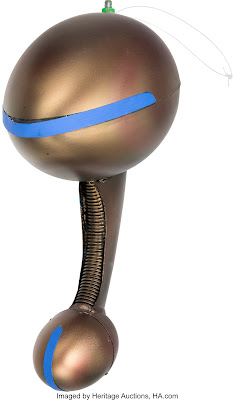 Here's a nice variation on the Klingon disruptor; this is Gorkon's pistol, made for The Undiscovered Country:

And maybe not quite so visually impressive, but super-cool: Captain Proton's jet pack!

There's some great production artwork available too, such as these Matt jefferies sketches, apparently for The Animated Series. We see here a spacewalk, and a quirky bubble-like "space tug". 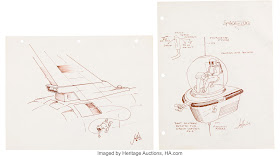 There's a fully realised matt painting, by Syd Dutton. I think this is Penthara IV from TNG's A Matter of Time. 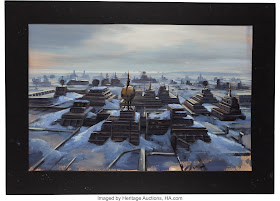 And there's quite a bit of Dan Curry concept art, such as this could-be-a-great-pulp-sci-fi-book-cover take on the Hanonian land eel from Voyager's Basics. 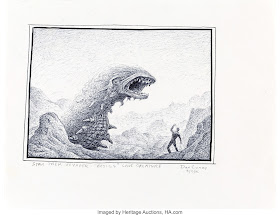 Dan Curry is also behind these concepts made for Enterprise, for a new look Klingon targ and Vulcan Sehlat. 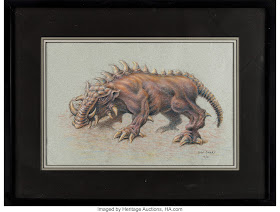 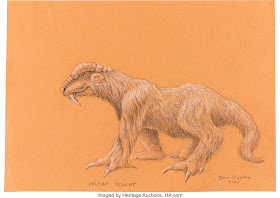 Another Curry illustration, combined with design by Mike Okuda, was used for a display panel in Enterprise's Affliction. A print of the original Klingon anatomy illustration is also included in the lot. 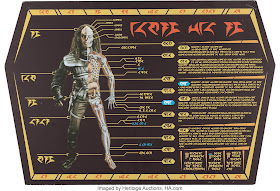 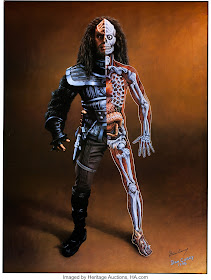 And moving off screen, Curry also produced this glorious cover for DC Comic's Special, Raise the Defiant, the original artwork for which is up for sale. 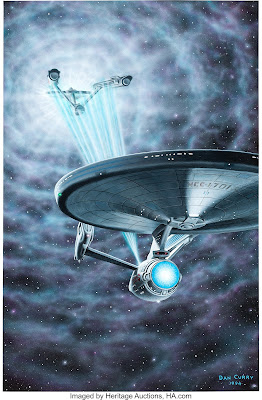 And talking of artwork, as mentioned the auction includes pieces from 50 Artists 50 Years. Many of these are prints, but I think the more interesting pieces at auction are those which are the original artwork, particularly the 3D items. For instance Hyunju Kim's sewn piece NUBIGi, 000, 095 must really have some impact in person: 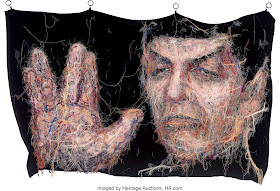 One of my favourite pieces in the exhibition is a sculpture of a Borg Cube, Assimilation by Neal Smith which amazingly for such a convincing rendition of the ship is made mostly out of Hot Wheels toy cars! 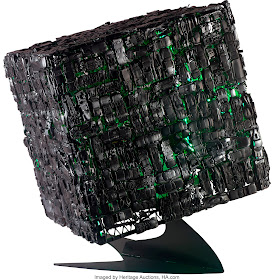 Juan Ortiz's untitled piece is an actual box of cereal! 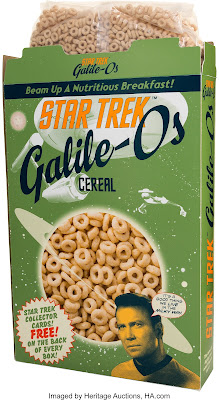 Then there's this beautiful rendition of Uhura by Nick Walker; acrylics on canvas. 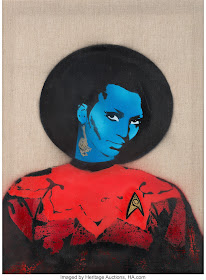 And a silkscreen pieces by Matt Ferguson, Arena.

I imagine possibly the most sought after piece though will be Leonard Nemoy's series of photographs, Hand In Vulcan Gesture. 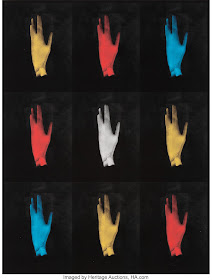 The above is just a small selection of what is available, so make sure you check out Heritage Auctions' listings to find many other interestings pieces.