FanSets have continued their speedy exploration of Discovery with their third wave of character and ship pins already; continue below to check them out. But first, lets check out the last two EpisodePins for a while.

For episode eight, Si Vis Pacem Para Bellum, they really outdid themselves, with a wonderfully detailed pin depicting the final moments of the mission of Pahvo. The best design in the series so far I think. 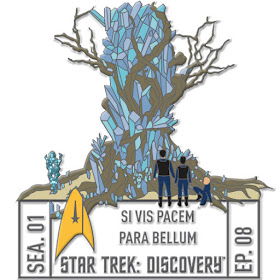 For episode seven they went down the more familiar path of a character piece, with oddly the second appearance of Harry Mudd on an EpisodePin, albeit this time in his glorious Andorian helmet: 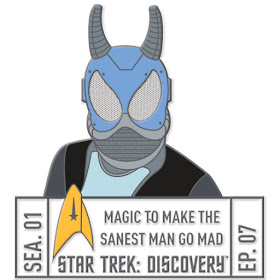 Where is episode nine I hear you ask? I wondered the same thing until I released the schedule for the pins was announced before the season split was tweaked, so episode nine would have originally been the first episode of the 2018 half of the season. And FanSets have indeed confirmed that when I asked, so we can look forward to the reveal of that pin in the new year. Meanwhile the first eight pins should be shipping in a couple of weeks to people who signed up to get the whole lot, and FanSets have confirmed on twitter there will be limited numbers of single pins for those who want to pick and choose.

Already available is their third wave of ship and character pins. This includes their first Discovery Klingon MicroFleet pin, the Sarcophagus Ship: 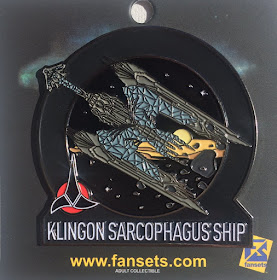 And four new MicroCrew pins. From the Klingon side we have a particularly menacing Kol, and a very purple L'Rell: 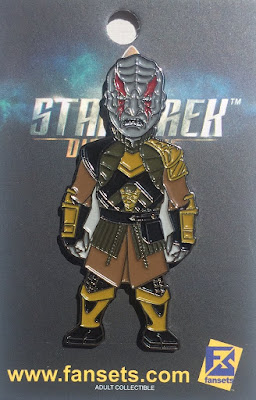 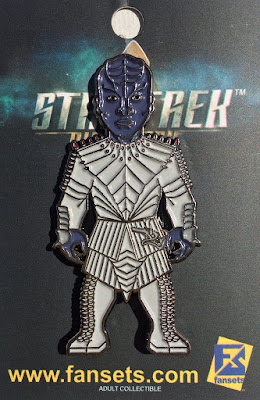 And from Starfleet we get Ash Tyler and Doctor Hugh Culber: 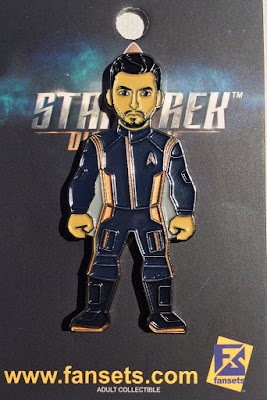 A fourth wave is already in the works for the new year, and Fansets have tweeted confirmation that it will include Admiral Cornwell and Airiam, among others.

Also confirmed on twitter for a 2018 release will be a series of pins based on the various alien emblems of Star Trek.

In the meantime, I'm told there are plans for a bunch of new pins from the rest of Trek while we wait for the next batch of Discovery releases. So you're new Discovery crew won't be lonely!

UPDATE: And Fansets have kindly sent me this preview of one of those forthcoming pins, Ilia from The Motion Picture: 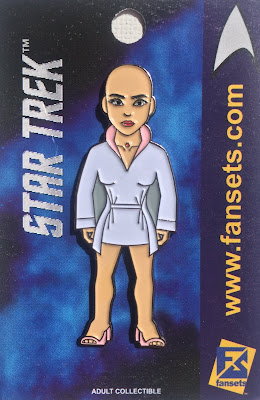