IDW have announced their February solicitations, which include two new Star Trek comics, plus an omnibus book. Continue below for all the details


It’s the penultimate chapter of “I.D.I.C.,” the blockbuster Star Trek comics event! Infinite Diversity in Infinite Combinations has introduced us to myriad versions of the beloved Enterprise crew... but the villain behind it all now threatens to wipe out all realities!

The book will be available in four different covers, with issue artist Marcus To providing the distinctive multiple reality portraits A cover. The B cover is yet to be revealed, but will be by Fico Ossio. Then there are also two retail incentive covers, one by Yoshi Yoshitani, featuring Uhura, and a photo-cover, an explosive still from Star Trek Beyond. 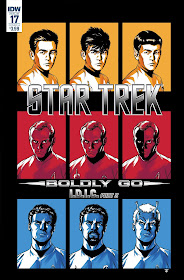 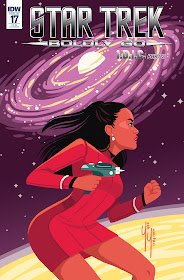 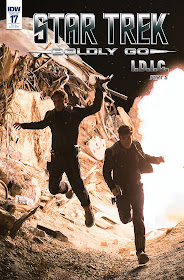 
Captain Kirk has found himself all alone on the Enterprise before—but what happens when each individual member of the crew finds themselves in a similar state? And who is behind this... isolation? 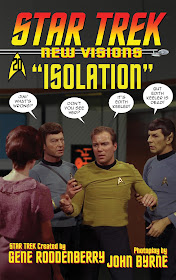 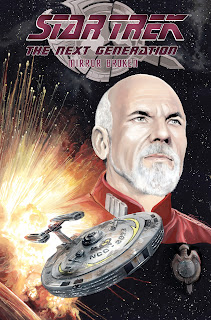 Mirror Broken
Written by Scott and  David Tipton, with art by J.K. Woodward.


For the first time in the history of Star Trek: The Next Generation, go into the alternate “Mirror, Mirror” universe to meet the cold-blooded crew of the I.S.S. Enterprise and their captain, the ruthless Jean-Luc Picard! Inspired by the classic Star Trek episode, this topsy-turvy world hosts an adventure of epic proportions, where nothing is what it seems!

This particular book is being solicited in advance, due for release in March. 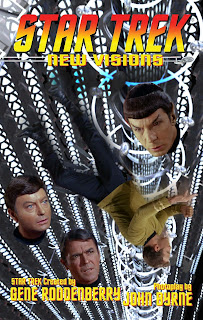 Even further in advance, Amazon have already got a listing up for New Visions, Volume 7, which they expect to arrive in August!

At the moment the listing includes a cover that reuses the cover-art from issue nineteen, but all the previous New Visions omnibus have had new covers, so I'd be surprised if this wasn't updated later. Here's the blurb:


Presenting all-new tales set in the Star Trek: The Original Series universe, done in a unique, one-of-a-kind photomontage style, using images from the classic TV series. It's as close as fans will ever come to getting new episodes featuring the original cast.

Three all new adventures! First, pulled down to a world made entirely of water, the Enterprise is in danger of literally flooding. Spock and McCoy discover a sinister purpose behind this bizarre planet in "What Pain It Is To Drown." Then, in "The Hunger," a mysterious entity has drifted above the outer rim of the Galaxy for thousands of years, draining life from all the worlds it found there. Now, it has learned of the banquet of populous planets near the heart of the Milky Way, and is heading there at terrifying speed--with only the Enterprise standing in its way. Then, what happens when an unstoppable force--death--meets an immoveble object--love? The Enterprise crew finds out in "True Love Like Ghosts."