The cover for the second Discovery novel, Drastic Measures, has been revealed by StarTrek.com. Written by Dayton Ward, the book, which is due out in February, is set to feature younger versions of Philippa Georgiou and Gabriella Lorca, as they get caught up in the Tarsus IV massacre, ten years before the TV events of Discovery. Suitably the stock photos of the two characters used to make up the cover have been altered to de-captain their uniforms! 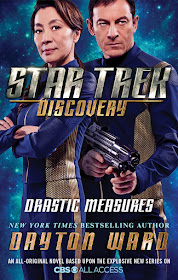 And here's a reminder of the blurb:


It is 2246, ten years prior to the “Battle at the Binary Stars,” and an aggressive contagion is ravaging the food supplies of the remote Federation colony Tarsus IV and the eight thousand people who call it home. Distress signals have been sent, but any meaningful assistance is weeks away. Lieutenant Commander Gabriel Lorca and a small team assigned to a Starfleet monitoring outpost are caught up in the escalating crisis, and bear witness as the colony’s governor, Adrian Kodos, employs an unimaginable solution in order to prevent mass starvation.

While awaiting transfer to her next assignment, Commander Philippa Georgiou is tasked with leading to Tarsus IV a small, hastily assembled group of first responders. It’s hoped this advance party can help stabilize the situation until more aid arrives, but Georgiou and her team discover that they're too late—Governor Kodos has already implemented his heinous strategy for extending the colony’s besieged food stores and safeguarding the community’s long-term survival.

In the midst of their rescue mission, Georgiou and Lorca must now hunt for the architect of this horrific tragedy and the man whom history will one day brand “Kodos the Executioner”... 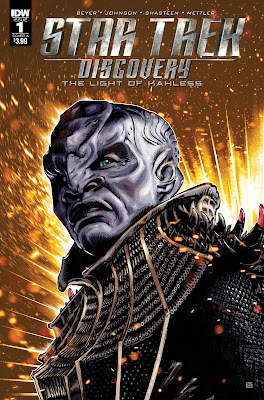 Before all that though, we're going to get another prequel, this one filling in the Klingon backstory for Discovery, in IDW's first Discovery comic miniseries, The Light of Kahless. The series, original expected to arrive in October is running a little behind, but IDW have now confirmed the release date for issue one as the 29th of November.

They've also updated the main cover to include the title. And you can see a few other covers in one of my previous reports.


And if you just can't wait for these new books, the first Discovery novel, David Mack's Desperate Hours, came out the same week Discovery began back in September. This book is also a prequel, giving us a more in depth introduction to the USS Shenzhou a year before the first episode.

Trek FM interviewed Mack about the book, allowing for the usual detailed exploration of the book they always get in author interview episodes (so make sure you read the book first to avoid spoilers). This included noting how the book went through several different concepts before landing on what we got:


The first two were ideas that would have been stories about Michael Burnham in her youth; either as a child, or as an adolescent. Adapting to life on Vulcan, and seeing some of these formative events from her life - The attack on the Dactari Alpha research outpost, the bombing incident at the Vulcan learning center. And eventually these ideas, they decided they wanted to keep them for the show, and also weren't 100% sure where they wanted them to go yet, so they didn't want to hand them off to a tie-in writer, they wanted to hang on to them until they were sure that they knew what they were doing with them.


For an overview of everything Discovery, including all the tie-in products, visit my Star Trek: Discovery guide page. For listings of various Star Trek books, including Discovery novels, and a bibliography of Dayton Ward, visit Trek Collective Lists.