Discovery #10: Despite Yourself trailer

CBS have released a trailer for episode ten of Discovery, Despite Yourself, to get us in the mood for the series return, in January! Continue below for a detailed look:

So as we know, Discovery is looooost in spaaaaace...

All the wreckage apparently has something to offer, as they send a little workbee off to do something in it.

Meanwhile, Stamets seems to be going a bit Gary Mitchell!

And there's also a lot going on with Tyler and L'Rell:

And someone having an accident... ouchy.

Showrunners Gretchen Berg and Aaron Harberts recently spoke to Indie Wire about many aspects of the series, including hinting at things to come. Berg noted:


...the war will continue in Chapter 2. It’ll be in there for sure. The Klingon war is this crisis where Burnham was there when it set off and she feels responsible for setting off. That is her arc for Season 1, and that is what will be paying off by the end of the season.

But Harberts noted a sidestep too:


...the war is always alive and always a motivator, but we also really wanted to try to tell some stories that stop down from the war. And I think that Chapter 2 will open in a place where as much as the war is weighing on our characters’ minds, they’ve got a bigger problem to solve.

Meanwhile CBS have also released a few more stills and clips from the last episode, Into the Forest I Go: 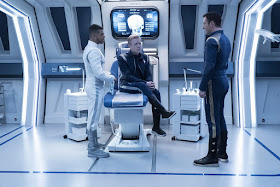 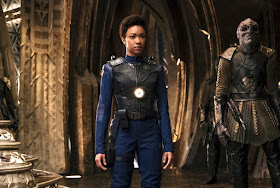 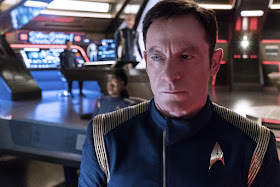 Star Trek: Discovery is be distributed almost everywhere in the world on Netflix, except for the US where is will be available on CBS All Access, and Canada where it will be on Bell Media channels and services.