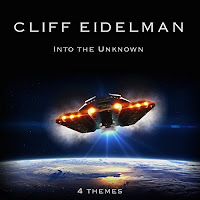 Composer Cliff Eidelman, best known to Star Trek fans for his music for Star Trek VI: The Undiscovered Country, has released a new EP based on music he composed for Star Trek: Discovery. Into the Unknown includes four tracks, two of which were composed early in the production of the series, and the other two which Eidelman continued to work on later, based on the ideas he had started to develope. You can find Into the Unknown on Amazon and iTunes, or right here via Spotify:

In a Facebook Live video Eidelman spoke a little about his work on the series, noting how his involvement was basically entirely linked to Bryan Fuller, and so when Fuller left the production, so did he:


Bryan Fuller invited me in to talk about it, and he was very encouraged by me; he was the showrunner for the new series. There was also another person involved, Nicholas Meyer, who was the director and co-writer of Star Trek VI: The Undiscovered Counter, which I was the composer on. Nick introduced me to Bryan, and said, "Would you like to meet Cliff?", and Bryan said "Absolutely, I'd love to, I love the score to Star Trek VI", that's how he expressed it to me.

So when I came in, he described what they were doing, and he was so interested in me possibly scoring this series, he asked me if I would write a theme. So I went ahead, I went home, and was encouraged. I kind of felt like this was probably going to happen; I would love to get back into doing another Star Trek series.

So I wrote the ideas for what I have now called Into the Unknown. But originally it was just an idea I was playing around with, and I presented it to Bryan, and he was very much into it, and he encouraged me to write a second piece, which I did.

And it wasn't long after that that Bryan left the show as the showrunner. When he left new people came in, and then they went a different direction. So the reason I was there was Bryan Fuller, when he left I kind of went with him, and wasn't kept on.

I thought, I've got these ideas now, and I like them, and I thought hey, why not develop it a bit more. So I developed two or three pieces, and decided to release it as an EP. I created my own story concepts, and my own visuals, which are apart and different from what i was doing for that initially. So that's how it happened.

Of course Jeff Russo ultimately landed the composer job on Discovery (and has been bringing us great stuff so far). I'd be surprised if there's not a Discovery soundtrack release some time next year. In the meantime we can just watch the show, or if you just want music, the opening titles on a constant loop!