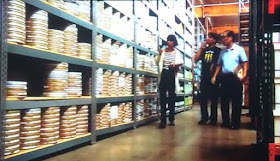 While this weekend had a lot of big happenings for the present and future of Star Trek, it also brought huge news from the very beginnings. Announced at the San Diego Comic Con, was the forthcoming release of Star Trek: The Original Series - The Roddenberry Vault, a new bluray featuring documentaries built around a treasure prove of never before seen behinds the scenes footage from the production of The Original Series.

It took several years just to organise the random snippets of film, and matching it up with audio stored in other cans. Once ready, Star Trek experts Mike and Denise Okuda could scrutinise the findings, and now with film maker Roger Lay Jr. (who produced many of the excellent documentaries on the TNG and Enterprise blurays) have created new documentaries telling the story of Star Trek's production through this new footage.

CBS and Roddenberry Entertainment's press release details what will be on the discs:


During the production of Star Trek: The Original Series, bits and pieces of episodic footage were left on the cutting room floor, then stored away in film cans for decades by the Gene Roddenberry Estate. Now, in celebration of the show’s 50th Anniversary, The Roddenberry Vault has finally been opened. Along with 12 of their favorite episodes, fans can see and own behind the scenes footage from the making of the series as well as alternate takes, deleted scenes, omitted dialogue, outtakes, and original visual FX elements.

The special feature documentaries are:

· Inside The Roddenberry Vault – A multi-part glimpse at classic episodes from new angles and perspectives.
· Star Trek: Revisiting A Classic – A look at life on the set during production.
· Strange New Worlds: Visualizing The Fantastic – An inside look at the groundbreaking work of the series’ designers and visual effects artists.

· The Corbomite Maneuver
· Arena
· Space Seed
· This Side of Paradise
· The Devil in the Dark
· The City on the Edge of Forever
· Operation: Annihilate!
· Metamorphosis
· Who Mourns for Adonais?
· Mirror, Mirror
· The Trouble With Tribbles
· Return to Tomorrow

You can watch the entire Comic Con panel which announced the project, including some sample clips, thanks to Roddenberry streaming it on Facebook. The panel gets going at about 06:00, and clips play at 06:50, 13:00, and 26:50.

A release date has not been set yet, but Star Trek: The Original Series - The Roddenberry Vault is expected to arrive before the end of the year.