At the San Diego Comic Con over the weekend, the Moebius Models booth included a display announcing they will releasing starship model kits of designs from the Kelvin timeline. Due to start in 2017, a poster on display promises the range will include the Star Trek Beyond version of the USS Enterprise, the USS Franklin, USS Kelvin, and Jellyfish. The display also had a fully built and finished original configuration Kelvin timeline USS Enterprise, and notes of plans for a lighting kit to accompany the release. 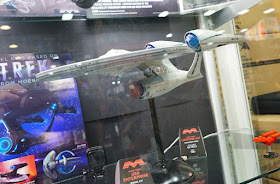 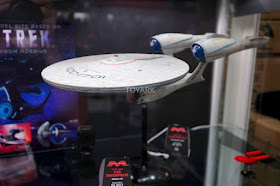 Images above via Toy Ark and Starchwreck Props and Models.