CBS and Paramount recently released a set of guidelines for Star Trek fan films. For many of the better known fan film productions these are game changing, and for other film makers they define clear limits on what is now acceptable. Continue below to ponder them.

CBS and Paramount announced the guidelines with a message on StarTrek.com:

Your support, enthusiasm and passion are the reasons that Star Trek has flourished for five decades and will continue long into the future. You are the reason the original Star Trek series was rescued and renewed in 1968, and the reason it has endured as an iconic and multi-generational phenomenon that has spawned seven television series and 13 movies.

Throughout the years, many of you have expressed your love for the franchise through creative endeavors such as fan films. So today, we want to show our appreciation by bringing fan films back to their roots.

The heart of these fan films has always been about expressing one’s love and passion for Star Trek. They have been about fan creativity and sharing unique stories with other fans to show admiration for the TV shows and movies. These films are a labor of love for any fan with desire, imagination and a camera.

We want to support this innovation and encourage celebrations of this beloved cultural phenomenon. It is with this perspective in mind that we are introducing a set of guidelines at Star Trek Fan Films.

Thank you for your ongoing and steadfast enthusiasm and support, which ensure that Star Trek will continue to inspire generations to come.

There are ten rules, which you can read them in full on StarTrek.com. In summary they are:


In a world where we have got used to big ongoing fan series such as Star Trek Continues, New Voyages, Renegades, and many more, plus movie length productions like Axanar, this is obviously a big change. In particular the episode length restriction, and the end of ongoing series will surely mean the end of all these, and the ban on involvement from Star Trek professionals will also change how many such productions are made.

It's a change made quite consciously by CBS/Paramount, I would suggest in part to protect their own endeavours, with Star Trek movie and TV productions both now ongoing, but also to ensure fan films are truly open to the fans. Speaking on The Official Star Trek Podcast, CBS's John Van Citters, made that case:


I've spoken with some people, including some people that have been involved peripherally with fan films , that it has created a bit of a barrier of entry to some people. Because there's Star Trek fans all over the world, and they don't necessarily have the ability to access Hollywood actors, and even meet people who worked on Trek, unless they are able to travel to one of the larger conventions. So, for a lot of people they felt like: "Well, I can't get this actor or that actor, I can't get these people to tell me story; I don't know if I should bother, because I just can't compete on the level these other guys are playing at".

A lot of the emphasis for this frankly came from what we've seen happening with fan films in recent years. What we felt needed to be done, in order to protect fan films for the long term. And that seems a little counter intuitive that putting some form of, what people are considering to be restrictions on fan creativity, but it's something that needed to be done, in order to cure some abuses that have been out there, and to kind of refocus this around the fan experience, and around creating more stories, rather than this kind of arms race around talent and fundraising.

On the podcast they discussed the guidelines in detail, well worth a listen if you're interested in their implications. Some of the other notable points included that there is no problem with existing fan films which are online, they are not required to be removed. Also there will be no sort of review process, these are guidelines put in place to avoid CBS/Paramount having to do anything, as long as future productions fall within them.

Naturally there have been comments from those involved in many of the existing big fan film productions. Star Trek production artist Doug Drexler, who has worked on many a Star Trek series both official ones and fan productions, summed it up well:


While I don't agree with everything in the regulations, I'm glad Paramount/CBS has released guidelines. Play by the rules, which are still generous... I mean look... it's like someone I don't know saying that I can use their Ferrari for a day every week, simply because I love those bitchin' cars. I'd say that's pretty generous.

Fan creativity has always been instrumental in keeping Star Trek alive, but it was clear that regulation needed to happen. Raising a million dollars on someone else's property, and proclaiming that you will do it better than they ever could is inviting the person who owns the house to step in and lay down some rules. Hello?

The studio has always been very generous, and in my opinion are still being incredibly tolerant. My advice is to not see the 30 minute limit as a boundary, see it as a creative challenge. Roddenberry's pre Star Trek writing gig was Have Gun Will Travel. Those shows were 22 minutes long, and they were lean, mean and to the point drama.

Believe me, Paramount/CBS does respect and appreciate the fans, and there are many fans of the fans there. I am hopeful that eventually things will loosen up. In the meantime, wouldn't be something if these rules led to the creation of a all new, and original saga. I know we've got it in us.

The official line from Star Trek Continues (which Doug is involved in) is conservative at the moment, awaiting further guidance on the implications of the guidelines on their ongoing work, creator Vic Mignogna said:


First and foremost, we have the utmost respect for CBS and their right to protect their property as they see fit. As soon as we know for sure how the latest developments will impact STC we will most certainly share it with all of you.

STC was created purely out of love and tribute, not a desire for profit or self-promotion. Thank you again for all your support.

If any series deserves a bit of leniency from CBS I think it's Star Trek Continues, they operate with utmost professionalism and respect, and have created not just some of the best fan films, but some of the best Star Trek outright. My dream: CBS lets them finish what they have planned, and then licenses a home video release of the whole series!

In contrast, Axanar, which is currently being sued by CBS and Paramount, are less than content, director Robert Meyer Burnett said (via Forces of Geek):


Without consultation with the very people they’re imposing guidelines upon, CBS and Paramount have completely destroyed the great future works of some of Star Trek‘s biggest and most life-long fans, who express their love for the Star Trek franchise through tireless creativity and industrious passion, with no hope of return other then sharing that passion with fellow fans and the greater world around them. Star Trek fandom is singular. There’s never been anything like it in the history of humanity. With these fan film guidelines, the current rights holders, who INHERITED those rights back in 2005, have effectively put a cap on the very fandom which kept the franchise alive for half a century. What a way to celebrate Star Trek‘s 50th Anniversary.

Axanar are also calling for a semi-boycott of the new Star Trek TV series in protest at the new rules (while expressly not boycotting Star Trek Beyond because of director Justin Lin's support for them). But I'm not even going to link to that childish response... So you'll have to go hunt it out if that appeals to you. 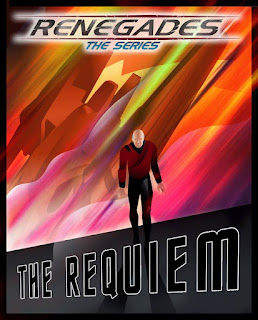 Renegades have taken a different angle, instead choosing to remove Star Trek elements from their production entirely so they can continue unhindered by he new rules:


As you know, we've already begun filming “The Requiem” so we cannot halt, suspend, or postpone production. Renegades, from the get go, was designed to be transformative... not derivative. Thus, with very minor changes to our script, we have eliminated all of the Star Trek references. The good news is that Renegades is now a completely original and ongoing series.

Perhaps the fact I am reporting on these particular productions is symptomatic of one of the problems CBS are seeking to address; there is a top tier of Star Trek fan films now, which while great, perhaps overwhelm anyone else. One final and exciting note from John Van Citters on the The Official Star Trek Podcast, gives some hope for the future potential of fan films:


If you're operating within the framework of this it's going to open up new opportunities, there's no question. At official events and conventions in the past, we haven't been able to grant permission to show fan films, we haven't been able to grant permission for fan film groups to exhibit and fund-raise at them. If you're in compliance with these, that is something that's going to change; there is a lot of opportunity that comes with this, and that's something I am very excited about because it's going to help ramp up fan involvement and fan participation...