Almost two years ago the original studio model of the USS Enterprise left it's home in the gift shop of the Smithsonian Institution's National Air and Space Museum to spend some time in spacedock for a major overall. After months of repairs, reinforcements, new lighting installations, and a fresh coat of paint, the Enterprise has now returned, to a new place of honour in the new look Boeing Milestones of Flight Hall.

The model sits aside other significant artefacts from the history of flight and space exploration, including Sputnik, an Apollo lunar module, and SpaceShipOne. 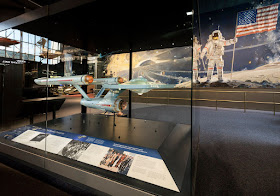 TrekCore have visited the display, and have a good gallery of shots, including this view of the rear, which in contrast to the other side, make's the model's use from television production  obvious. The original stand is also on display. You can get a good look at other exhibits in the hall in a good report from Collect Space. 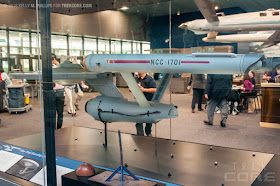 And here's a beauty shot from the Smithsonian: 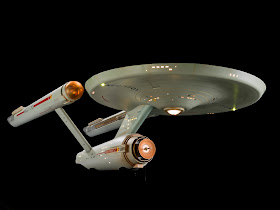 The Smithsonian have also posted a new article detailing the final stages of the Enterprise's restoration, including details of the final paint work:

Kim’s first step was mixing the colors that would be used for the weathering, details, and markings. The detail paints were mixed to match the colors that Dave had carefully revealed, and were adjusted and balanced for appropriate contrast and intensity based on comparisons with the historic images.

A full-scale mockup of several of the model’s parts (nacelles and secondary hull) provided a way to test paints, techniques, and finishes before applying any paint to the actual artifact. 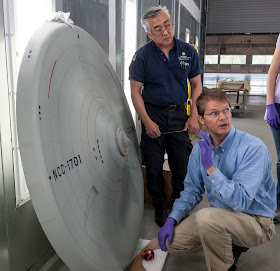 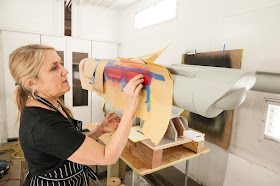 Finally, it has also been announced the Smithsonian Channel will been screening a two hour special looking at the restoration of the Enterprise, and the influence of Star Trek on technology. It will air on the 4th of September. This is how it was summarised in a press release:

The two-hour special also profiles a new generation of engineers and scientists who are making Star Trek’s visionary technology real, pushing the boundaries of physics with inventions first conceived on the iconic series: warp drives, medical tricorders, cloaking devices and tractor beams. Proving that one TV show has truly gone where no man has gone before, BUILDING STAR TREK will showcase clips from the original series that highlight each scientific innovation and the new technologies that have inspired generations.