The USS Enterprise is getting a bit of bling this golden anniversary year, continue below to check out the latest models of the iconic ship.

Announced as one of Diamond Select Toys' San Diego Comic Con exclusives is a golden edition of the USS Enterprise-A. The model maintains the usual printing, giving an interesting smarting of blue over the golden hull. This will be a limited edition of 300.

You might be wondering why they've chosen to do the Enterprise-A, rather than the classic TV era design which is now fifty years old. Well maybe because they already released a gold version of that! Back in 2007 for the fortieth anniversary.

If you do want a golden classic Enterprise, then Bif Bang Pow are ready to serve, with their golden Enterprise Monitor Mate bobble-ship. This one is the deal deal too, twnety-four karat gold plated! While this is also a San Diego Comic Con exclusive, you can also pre-order it on Entertainment Earth. 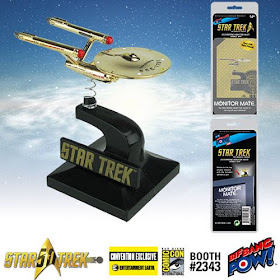 Finally, for a more substantial display, Bradford Exchange also have a model of the Enterprise on the way, and this one isn't gold! The sculpture has some sort of built in illumination, although few other details have so far been revealed. 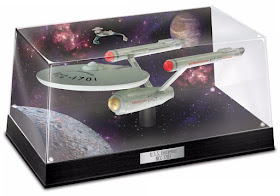