Star Trek Beyond might be out in some parts of the world, but plenty of countries are still waiting, with releases in August for many in Europe and Asian, most of South America having to wait until September, and poor old Japan not getting it until October! Which means months of continued marketing for the movie still to come!

I wouldn't expect much more than localised versions of the posters and trailers we've already seen in most cases. But in South Korea, where the film is out in a couple of weeks, they have decided to do their own thing, and released two brand new posters with a totally different look to all the others so far. This first one shows off Starbase Yorktown in all it's gravitational bending glory: 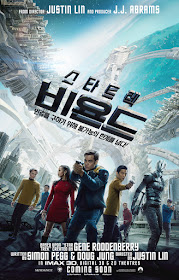 And in a parallel arrangement of images, the orb of Yorktwon is replace by the crashed saucer of the Enterprise in a second poster: 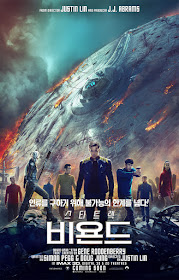 Meanwhile in the US, Paramount have released a load of new trailers, now featuring quotes from reviews, or pointing out how well the film is rated on Rotten Tomatoes. I've added them all to my Trek Collective Archive of Star Trek Beyond trailers - Most of them are 15 second TV spots, though here's the longest of the batch, a rousing minute:

Paramount have also released another clip, featuring Krall and Uhura:

To keep track of all the latest information on the film, visit my Star Trek Beyond guide page, and see the relevant pages on Trek Collective Archives to find all the other trailers, clips, posters, promotional stills, and featurettes.