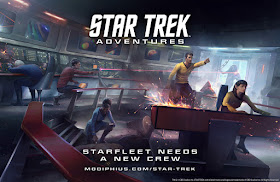 Modiphius Entertainment have announced they are working on a new Star Trek role play game, Star Trek: Adventures, which is set for release next summer.

The game will span the entire prime timeline, and will also make use of miniature models of characters, as Modiphius describe in their announcement:

Modiphius say that the focus will be on telling new stories, but will have plenty of familiar faces:


Yes there will be pre-generated characters for many of the well known personalities from Star Trek including Picard, Kirk and more, but the focus will be on creating your own stories in the Star Trek universe.

They also emphasis it's not all fighting:


In Star Trek Adventures the ability to solve problems, deal with moral dilemmas, unearth conspiracies or ancient mysteries, will be as important as being able to command a ship in action or lead an Away Team under fire. 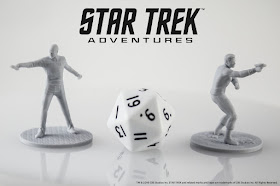 The initial core book will focus on playing using Starfleet characters, but Modiphius promise later supplements will enable playing as other non-Federation species too. The wide range of figurines they describe certainly make it sound like they have extensive plans for the game. The first two of those figure, Kirk and Picard, will be available this year at preview playing events:


There will be a wide range of Star Trek Adventures miniatures including many of your favourite characters as well as generic crew, away teams, boarding parties and aliens. Accompanying the range will be geomorphic map tiles of Federation, Klingon and other ships, space stations, lost colonies, ancient ruins as well as dangerous and mysterious worlds to explore.

The figures will be single piece and multi-part, and available in collector's blisters as well as crew packs giving you whole away teams or bridge crews from different eras. As you can see from the scale picture example above they are 32mm and made in a soft resin. These two initial figures of Captain Kirk and Picard will be available to those signing up for the official playtest at the Modiphius stands at GenCon, Essen Spiele and Dragonmeet and later as part of various sets.

The game will have some simple starship combat play, but there will not be miniature ships joining the crew as other licensees (Wizkids) already do that. 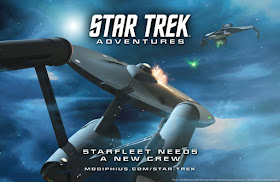 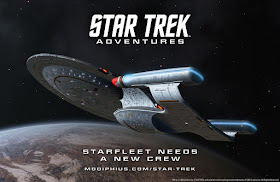 Modiphus will be the first Star Trek RPG game in well over a decade, following Decipher who last held the license, and Last Unicorn Games, FASA, and Heritage Models before.