Lots of Star Trek books bits and pieces gathered below, including news of a new Titan novel, new rare comic reprints, a look at the new Star Trek Encyclopedia, and some intriguing new titles. Continue below for details of all those and more!

First up, from the world of Star Trek comics, Amazon has now added a listing for the second book in the reprints of the UK comic strips, the rare early Star Trek comics which were originally published in several magazines in the UK in the sixties and seventies. Star Trek: The Classic UK Comics, Volume Two, is due out in November, and has this snazzy cover that shows off some of the glorious art within. 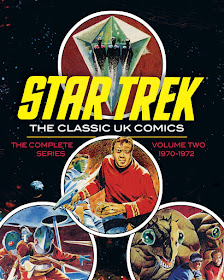 Here's the blurb, which from the bonus features seems to imply we can expect at least one more volume in this series to complete the reprinting of the full run, and provide the second half of the encyclopedia mentioned:


This second volume fills in another major gap in Star Trek lore, courtesy of these never-before reprinted comics that originally appeared in weekly British magazines in the early 1970s. There's much to love about these wonky, way-out writings and their atypical artwork. These oft-forgotten Star Trek tales represent a different era. They're lost gems with many facets and a unique perspective, an eccentric corner of Star Trek history unlike any other. These are the U.K. voyages of the Starship Enterprise―and, now, at last, fans everywhere can experience them.

As a special bonus, Rich Handley provides the first half of a detailed encyclopedia of all things Star Trek from these British comics. Exploring the minutiae is half the fun of enjoying a franchise, and when it comes to Trek, there's no end of trivia to devour!

Meanwhile in prose, a new ebook novella has just been published, and released on publication day was the cover! Rules of Accusation is Paula M. Block and Terry J. Erdmann's second Quark focused DS9 novel, and it looks like this: 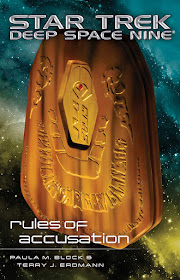 
On the space station Deep Space 9, Quark’s Public House, Café, Gaming Emporium, Holosuite Arcade, and Ferengi Embassy can’t legitimately be called an embassy until the Grand Nagus—namely, Quark’s brother Rom—dedicates it as such. Not that Quark really cares about Ferengi protocol, but a well-publicized dedication ceremony will naturally draw people to the bar. Everybody loves a good open house—free appetizers, half-price drinks, door prizes, etc.—all of which Quark can write off as Embassy expenses. It’s a win-win situation, with him on both sides of the win. There’s even a plan to display the original scroll of the Ferengi Rules of Acquisition—which no one has seen for decades given that it’s been held in protective storage—and charge patrons by the minute to look at it up close. Nothing, of course, could possibly go wrong with this big plan. Absolutely nothing at all…

And if that hasn't tempted you enough, you can read some preview pages thanks to Amazon's handy preview thing:

My only other prose news today is the reveal that David Mack will be returning to the bridge of the USS Titan! Mentioned, but not elaborated on, in an interview on TrekMovie, that next novel in the Titan series will be titled Fortune of War, and according to Mack's website it will be coming some time in 2018.

Moving on to non-fiction, CBS Consumer Product's John Van Citters tweeted the following two photos of the new Star Trek Encyclopedia, givings us the first look at the covers for the two volumes inside: 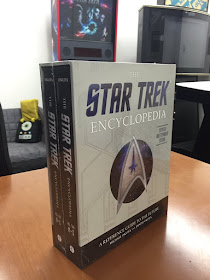 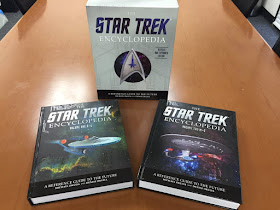 This massive new edition of the Encyclopedia, revised and expanded once more by Mike and Denise Okuda, is due out in October.

Due out in a week or so is Dayton Ward's new Star Trek travel guide. That's right, you can plan your own visit to the homeworld of Spock, Tuvok, and T'Pol in Hidden Universe Travel Guide - Star Trek: Vulcan. Publishers Insight Editions has released this preview video, via StarTrek.com.

Continuing to add diversity to your Star Trek bookshelf, it appears Titan Books have another Star Trek art book on the way. Listed for publication in March next year Star Trek - The Art of Juan Ortiz: The Next Generation,  which I assume will be a TNG version of what Juan Ortiz previously did on TOS, with retro posters for each episode (at the moment the blurb listed is a copy of the TOS art book).

Finally, a mystery! Also coming from Titan Books is Star Trek Beyond - The Collector's Edition. The 128 page book is due out in October, and there are no clues as to what it is! Titan Books previously produced the art book from the first nuTrek movie, Star Trek: The Art of the Film, they have also published books collecting articles from the Star Trek Magazine, and reprints of Star Trek comics. So with that vague title, this could be anything!