La La Land Records have struck a vein of pure awesome with their newly announced Star Trek soundtrack release; a single edition of the TOS theme, released on a Starfleet delta shaped vinyl disc, made in command gold.

The A side features the season three soprano version of the the main title, while side B is the season one cello version. It will, naturally, be a limited edition of 1701 units, and available first at the San Diego Comic Con, before being offered online, from La La Land's website, from the 26th of July. 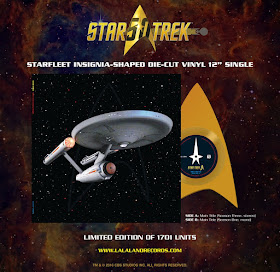 Details via StarTrek.com, while the image below of the real disc on turntable comes from Neil S. Bulk on Twitter: 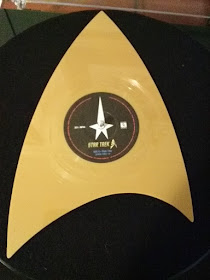