As part of the 50th anniversary, CBS have created a Star Trek art exhibition, 50 Artists, 50 Years, which features a wide variety of artists and mediums all celebrating every facet of Star Trek. The exhibition will open first at the San Diego Comic Con, before going on to tour the world. Many of the pieces remain a mystery, but CBS are gradually adding new listings to their website, and more artwork keeps appearing on Star Trek merchandise too. Continue below for a look at the most recently revealed works.

There are at least two calendars on the way featuring art from the exhibition. The Universe Publishing version which was previewed a while ago, is in a poster format. Danilo meanwhile is issuing something a bit more like a catalogue for the exhibition, with numerous artworks and brief creator biographies represented across the pages of the Star Trek 50th Anniversary Official 2017 Calendar.  The front cover features Rocco Malatesta's Spock illustration 50 - Live Long and Prosper. 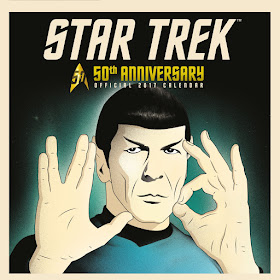 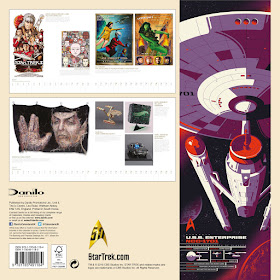 A couple more preview spreads have been revealed. You can get quite a good look at January:

While February is lower resolution, but still gives a nice impression of the diversity of the artwork featured.

All the artwork will also be featured in a book from Titan Books, and listings on a sub-site on StarTrek.com. Pieces are gradually being added to the latter in the build up to the opening of the exhibition. The most recent additions include a lovely assembly of aliens by Starfleet Academy comic book artist Derek Charm, titled Fifty Aliens: 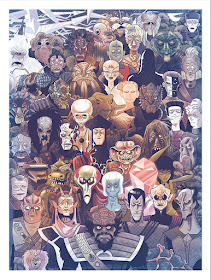 I love how Charm draws Odo, I'd love to see him do a DS9 comic series on that image alone! The StarTrek.com listing also includes a short interview, in which Charm described his approach to the piece:


My piece is a depiction of 50 aliens from the various Star Trek series. To prepare for this piece, I dug in and researched all the alien species that were documented both online and in the materials provided by CBS. From that huge list I selected the 50 I felt were the most iconic, or had the most interesting looks. The piece was done digitally, with a combination of Manga Studio and Photoshop. 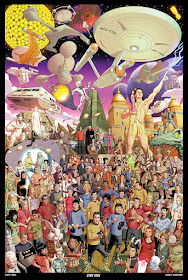 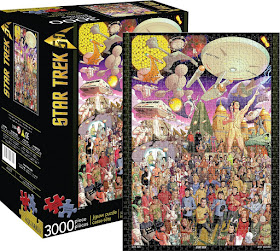 This next piece might seem familiar, Dusty Abell's Star Trek The Original Series has been a popular bit of fan art for a few years, but now it's had an updated colouring by comic book artist Lovern Kindzierski, and is officially licensed. Dusty told StarTrek.com about creating the piece:


My poster is a loving homage to one of my favorite shows ever and includes at least one character, creature, ship or location from every one of the original 79 episodes. Deciding which characters would be included in the final piece was the first challenge I had to resolve. I wish I could have included everyone, but I hope Trek fans everywhere have at least a handful of their favorites represented.

The basic concept of the Trek poster came about fairly quickly; the execution and completion of the piece took me about a year and a half of picking away at it little by little on weekends or whenever I had spare time during the week. There was also a lot of time researching costume, ship and prop details where I really strove to get as close to the actual pieces as I could manage.

This image is also now available as a jigsaw puzzle from Aquarius. 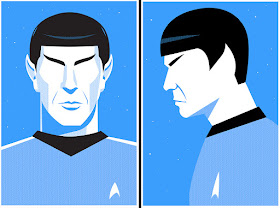 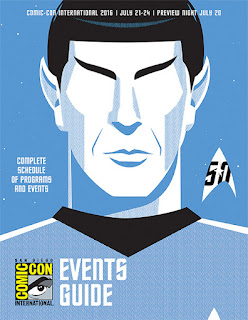 The final images released for now are two portraits of Spock by Ty Mattson, Mr. Spock and Mr. Spock II. Like many of the artists, and I'm sure many trekkies in general, Mattson was moved by the death of Leonard Nimoy, as he told StarTrek.com:


I went back to The Original Series. And back to my original memories of the series. To me, Spock is so iconic that I wanted to focus on him. I wanted to depict him using only two colors, with a very graphic, pop-art sensibility. Then to hear that Leonard Nimoy passed away while I was working on this piece, it became sort of a tribute to him and his work.

This piece has also been selected to be used for the cover of the Events Guide at the San Diego Comic Con, and will be seen on T-shirts of volunteers at the convention too!

For at look at some of the other art in the 50 Artists, 50 Years exhibition, see my previous preview article, and coverage of mugs, and the poster calendar, which also feature artwork from the collection.