Omazing opportunity to be in Star Trek Beyond 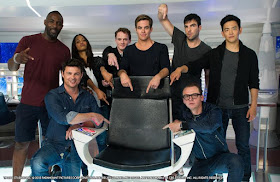 Fund-raising platform Omaze has launched a new tie-in with Star Trek Beyond, to win a walk-on role in the film, while raising funds for several different charities.

By making a donation to the fund-raising pool you get entries into the prize draw, from which one person will win the walk-on roll. Additionally in each of the six weeks of the campaign one person will win a place in the "Star Trek: To Boldy Go Crew", getting them a trip to the sets, to meet the cast, and watch scenes being filmed. Here's the cast, on the sets of Star Trek Beyond, to tell you all about it. Watch out for the Enterprise bridge's new disco mode at the end!

Donations start at $10, and for every dollar donated you get ten chances to be drawn. You can donate anything up to $100,000, with donations above $10 buying rewards, ranging from thank you cards and videos from the cast and crew, and T-shirts, up to prized relics from the production; original concept art and props, and then at the very top end, advanced screenings of Star Trek Beyond, and a replica captain's chair. 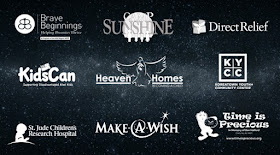 Each of the main cast of the film have nominated a charity, and in honour of Leonard Nimoy, his wife, Susan Nimoy also nominated one. The funds raised will be split equally between these organisations, which are as follows:


• Brave Beginnings — an organization dedicated to ensuring that ventilators and life-saving neonatal equipment are always available to newborns in critical need. Nominated by Zoe Saldana.

• Camp Sunshine — a place where children with life-threatening illnesses and their families can regroup, reenergize, and restore hope for the future. Nominated by Anton Yelchin.

• Direct Relief —a leading medical relief organization that is improving the health of people in need worldwide. Nominated by Zachary Quinto.

• Heaven Homes — an organization helping establish children's homes and centers, while providing secure, safe and loving environments where children can be nurtured to realize their full potential. Nominated by Idris Elba.

• KidsCan — an organization that provides food, clothing and healthcare to disadvantaged youth in New Zealand. Nominated by Karl Urban.

• Koreatown Youth & Community Center — an organization serving the evolving needs of the Korean American population in the greater Los Angeles area as well as the multiethnic Koreatown community. Nominated by John Cho.

• Time is Precious — an organization helping to create a more comfortable and relaxed atmosphere for children, which in return helps assist with their treatment and recovery. Nominated by Simon Pegg.

• St. Jude Children’s Research Hospital — an organization that is leading the way in advancing cures for childhood cancer and other life-threatening diseases. Nominated by Susan Nimoy in honor of Leonard Nimoy.

If you would like to make a donation and gain a chance to win a visit to the production of Star Trek Beyond, head on over to Omaze.