At the past weekend's San Diego Comic Con Her Universe launched two new items of clothing in their Star Trek range, and included Star Trek themed design in their fashion show. Continue below for all the details.

Several new designs from the worlds of Marvel, Star Wars, Studio Ghibli, and, of course, Star Trek, have been launched to coincide with the Comic Con. Both of the new Star Trek pieces are based on TNG costumes. That includes the rather brilliantly named, The Captain Picardigan, a cardigan based on the TNG uniform: 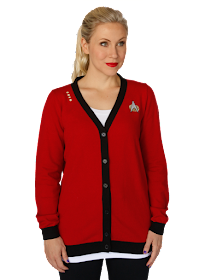 Then there's the more directly translated Deanna Troi costume dress, based on her purple dress: 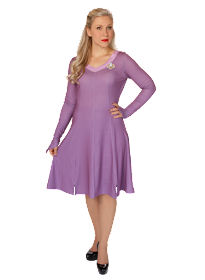 Her Universe also pulled out all the stops for their second Comic Con fashion show, which included designs inspired by numerous corners of geek culture. The Star Trek entry in the show was "The Silver Lady" a USS Enterprise inspired dress, with a star-scape cape, designed by Laura E. Desch. 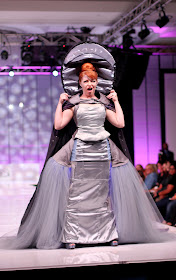 The image above comes via Pop Sugar, who's report on the show highlights all the other designs from Marvel, Star Wars, and more. StarTrek.com's report meanwhile highlights both the designer dress, and the catwalk appearances of the two new everyday Star Trek designs on offer. Finally, check out Her Universe's press release, to see all the other new pieces launched over the weekend.