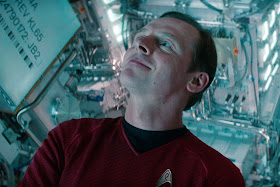 In an off-hand close to a blog post discussing social and economic impacts of geek-culture, Simon Pegg, one of the writers of the next Star Trek movie, confirmed the title will be, as rumoured by TrekMovie some weeks ago, Star Trek Beyond.

Pegg's very thoughtful blog came on the back of a recent interview in which he pondered whether the growing popularity of genre entertainment, and the escapist spectacle many such films present, is dumbing down a generation:


Obviously I’m very much a self-confessed fan of science fiction and genre cinema but part of me looks at society as it is now and just thinks we’ve been infantilised by our own taste.

It is a kind of dumbing down, in a way, because it’s taking our focus away from real-world issues. Films used to be about challenging, emotional journeys or moral questions that might make you walk away and re-evaluate how you felt about … whatever.

Interestingly in the same interview he made a comparison between the Marvel mass popularity, and Star Trek current success, or indeed, relative failure:


They had a script for Star Trek that wasn’t really working for them. I think the studio was worried that it might have been a little bit too Star Trek-y.

Avengers Assemble, which is a pretty nerdy, comic-book, supposedly niche thing, made $1.5bn dollars. Star Trek: Into Darkness made half a billion, which is still brilliant. But it means that, according to the studio, there’s still $1bn worth of box office that don’t go and see Star Trek. And they want to know why.

His pro-offered solution it to:


...make a western or a thriller or a heist movie, then populate that with Star Trek characters so it’s more inclusive to an audience that might be a little bit reticent

Which I think is pleasingly Star Trek-y! It is one of the great strengths of Star Trek, that it can take just about any other genre and make a Star Trek story out of it. That, hand-in-hand with Pegg apparently pondering the lack of depth in big budget spectacle, gives me hope he will offer the script for Star Trek Beyond as the solution! And if that happens to also make a billion plus, and spawn a Marvel-style movie and television mega-franchise rebirth, well so be it!

Meanwhile, with the title now confirmed and production weeks away from shooting, I've set up my Star Trek Beyond Guide page. As I did with Into Darkness, I'll be compiling all the latest news and updates from the movie production, and tie-in comics, toys, and such, into that one easy to find place, linked to from the menu bar at the top of the site. Amazing that there is little over a year until we see the film!