Last month the covers were released for the 2016 Ships of the Line calendar, but unusually the back cover did not showcase all the images within. Well now that has been amended, as Amazon have now posted a new back cover featuring all thirteen images, and revealing all the artists who won a place in the calendar, following the new competition submission process for this edition. 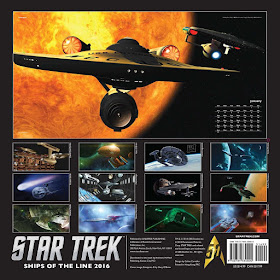 Continue below for a run-down of what's featured there, and a closer look at some of the images.

So as best I can squint the tiny names on that image (please let me know if you're a contributor and I got it wrong), the images are as follows:

The big image, titled simply, Enterprise, is by Brian McMahon, and features the original TOS Enterprise, and presumably the Ambassador class ship is the Enterprise-C, one or both of them perhaps having just slingshot round the sun to meet each other.

The first small image is by David Gian-Cursio, and shows the refit USS Enterprise alongside an original configuration USS Endeavour, which has some nice Trek-lit links, as David let me know: "the Endeavour, which was a double Trek-lit reference, both because of her starring role in “Vanguard” and “Seekers,” and since “A Flag Full of Stars” mentioned she was next on the list to be upgraded once the Enterprise was finished". David has also posted a blog about this image.

The Enterprise-D features on the next image, by Gary O'Brien, this image is also going to be used as the front cover. 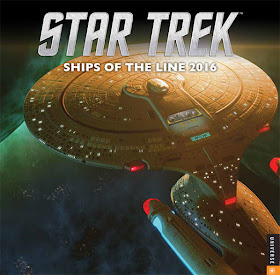 I believe this is in fact a manipulated image of the DST Enterprise-D model, with lots more detail added, like that open shuttlebay. This is how Gary makes many of the images you can see on his website, and here's a video of how he does it, in this case with Voyager:

Next up is one of my favourite fan designs, now made official! Mark Kingsnorth's Insignia class, this is unique in this edition of the calendar in having a little technical information insert. You can see lot more about the Insignia class, and other designs by Mark, including some of his other entries into the Ships of the Line competition, on his website.

Next up is Colin Morella's Enterprise-E, with the Argo on approach. You can see more of Colin's work on DeviantART, including a whole album of Star Trek pieces.

Richard Smith takes us back to the other end of the Enterprise linage, with the NX-01 comet chasing.

Michael Yeager give us an interior spacedock view of the pre-refit Enterprise, with one of the shuttlecraft flying past.

Robert Heckadon gives us a new TOS-era ship, a sort of USS Kelvin arrangement, but with a Nebula class-like pod on top and NX-like deflector placement. You can see more Trek art from Robert on DevinatART too.

Robert Thompson gives us the Klingon Vor'cha class, in a faithful recreation of a shot from the episode Redemption. I believe Robert is another person who achieved this by photographing physical models. You can see more from Robert on his DeviantART as well, including the non-calendar cropped version of the image: 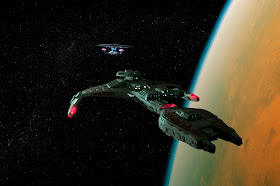 There's an armada of Romulan ships in Thomas Raube's image, which he originally titled A new Home for the Rhiannsu? This is the Romulan fleet approaching their new homeworld in Star Trek Online, following the Hobus supernova, Rator III. You can see much more Star Trek work by Thomas on his DeviantART, including the image I would have picked for the calendar, a glorious reimaging of TAS's Kukulkan. 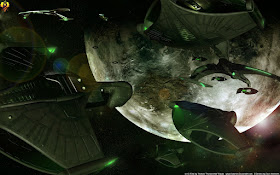 There's an even bigger STO link with Shawn Weixelman's image, which started out life as a design for the Enterprise-F competition. It didn't win that competition, although did still eventually find it's way into the game, as the inspiration for another group of classes. You can see loads more about this design, including images, video, and the story of its development, on Shawn's website.

Here are some orthographic veiws of the design too: 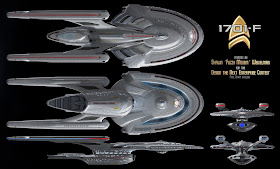 The Romulans strike again, although there's just a lone warbird in Chris Ford's image, which is based on a photo of a HUGE model kit. You can see another image of the build on Modeler Magic. 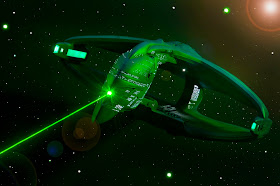 Finally, a spread from the calendar that has previously been released, David Combe's Defiant approaching a Borg Cube: