IDW have released their solicitations for August, which include three Star Trek titles. There's the start of a new two part story in the nuTrek ongoing series, the second issue in the Green Lantern crossover, and an omnibus book. Continue below for full details of all of those, plus some other Trek comics news:


In this all-new 2-part story called DEITY, the crew of Starship Enterprise discovers an uncharted world whose inhabitants worship vengeful gods... gods who now turn their wrath on Captain Kirk and his crew!

There are two covers for this one, the regular by Tony Shashteen, and the photo subscription cover. 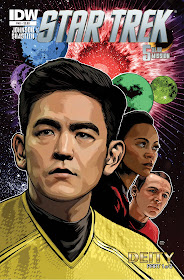 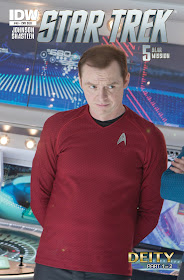 
The comics crossover event of 2015 continues here! Hal Jordan meets Captain Kirk and the crew of the Enterprise for the first time as six Lantern rings choose new bearers! But which Trek characters - and which alien races - will be selected? Iconic franchises collide for the first time in this all-new galaxy-spanning epic!

There are three covers for this one, the regular by Paul Pope, a variant by Darick Robertson, and the subscription cover by Garry Brown. 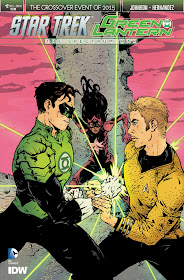 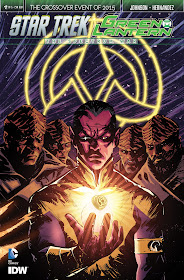 Comic Book Resources recently posted an interview with Mike Johnson, discussing the Green Lantern crossover. He gave this tease at how the story starts:


The Enterprise sends an away team down to a dead planet. On the surface they find a large-skulled skeleton surrounded by six -- yes, six -- dead rings. The rest you'll have to find out when it hits the stands.

He also confirmed the Klingon pictured on the cover for the first issue is Chang, and that DC's Sinestro will feature in the series. He gave laid a few hints about how the realities will meet too:


They exist in alternate realities that come into contact in this story because… that's enough. I don't want to spoil anything. What I can say is that the majority of the story takes place in the Trek timeline, because in the Lanterns' timeline, the… [laughs] seriously, I should stop. 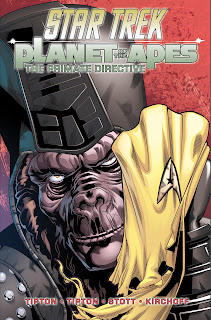 Star Trek/Planet of the Apes: The Primate Directive omnibus
Written by Scott and David Tipton, with art by Rachael Stott.


STAR TREK: The hope for the best of mankind's future! PLANET OF THE APES: A chilling look at the fall of humanity! How could these worlds possibly collide? What could possibly cause Captain Kirk and the crew of the Enterprise to side with Dr. Zaius to protect Ape City? And what does Colonel George Taylor have to say about it?

A bit further along in the year, Amazon now have a listing up for the latest book in IDW's Gold Key Archives series. Volume Four of the remastered reprint collection is due in October, and will include issues nineteen to twenty-four of the first ever Star Trek comic series, as the blurb attests:


Boldly going... where it all started! Re-presenting the first comic book adventures of the U.S.S. Enterprise and her crew! Fully remastered with new colors, Volume 4 collects issues #19-24, including stories "The Haunted Asteroid," "A World Gone Mad," "The Mummies of Heitus VII," "Siege in Superspace," "Child's Play," and "The Trial of Captain Kirk."

There's also a new omnibus release over in Spain, where a month or so ago Drakul released their latest Spanish translation, John Byrne's Leonard McCoy Frontier Doctor, published in Spain as Leonard McCoy, Médico Fronterizo. I think Byrne's comics are among the best Trek IDW has done (and the best Star Trek comics outright for that matter), and the pre-Motion Picture adventures of Dcotor McCoy have a particular charm, as you can see from the covers alone; these are the front and back covers for the new Spanish edition: 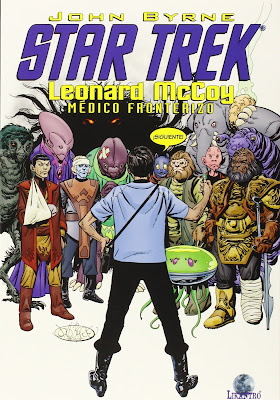 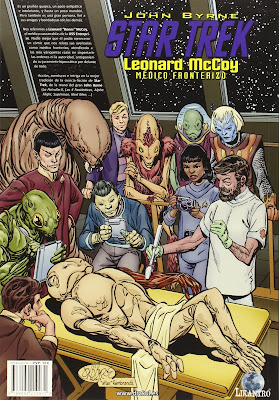 You can see a couple of interior preview pages of Drakul's website.

For full listings of all the upcoming Star Trek comic releases, and links to my previous coverage, hit the comics button on my 2015 schedule page.