The avalanche of new book cover continues! And the latest new releases come from a diverse range of forthcoming titles.

Insight Editions have plans for several non-fiction Star Trek books, and the first of those will be comprehensive exploration of costume design throughout the history of the franchise, in Paula M. Block and Terry J. Erdmann's Star Trek: Costumes - Five Decades of Fashion from the Final Frontier. The book is due out in September, and StarTrek.com released the cover: 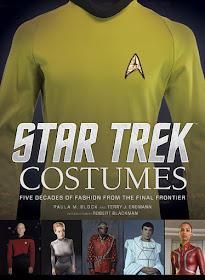 I think this is likely to be one of the most interesting non-fiction books in some time, and I hope it does well, as it might open the door to exploring other aspects of Star Trek production in the same fashion. Here's the blurb:


From the classic Starfleet uniforms and daringly provocative outfits of The Original Series, to flowing Vulcan robes, flamboyant Ferengi fashions, and formidable Klingon wedding attire, Star Trek: Costumes explores how these designs have played a key role in transporting fans to distant worlds and alien cultures over the last five decades.

Filled with exclusive photography, stills from the saga, rare concept art, and other striking visuals, Star Trek: Costumes also focuses on the talented individuals who have brought the Star Trek universe to life, including original costume designer William Ware Theiss and his successors, Robert Fletcher, Robert Blackman, and, most recently, Michael Kaplan.

Featuring extensive information on the creation of each featured costume, with insight and anecdotes from interviewees including Blackman, Kaplan, J.J. Abrams, LeVar Burton, Jonathan Frakes and Ronald D. Moore, this book is a comprehensive and captivating celebration of the incredible artistry that has made Star Trek’s costumes as innovative and imaginative as its futuristic technologies.

Also newly released is the cover Child of Two Worlds, Greg Cox's Pike-era TOS novel. This book is due out in December, and with the release of this cover, all the 2015 novels have now been revealed! Continue after the jump for a reminder of the blurb, plus the latest Cross Cult cover art. 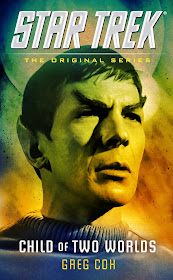 The year is 2255, not long after the events of the Original Series episode “The Cage.” A young Spock is science officer on the U.S.S. Enterprise, under the command of Captain Christopher Pike, when an outbreak of deadly Rigelian fever threatens the crew. Reviewing the Starfleet medical database, Dr. Phillip Boyce comes up with a highly experimental and untested new treatment that might save the crew. Just one problem: it requires a rare mineral substance, ryetalyn, which is not easily obtained…except on a remote alien colony near the Klingon border. But borders are somewhat blurry in this part of galaxy. Pike will need to tread carefully in order to avoid provoking an armed conflict with the Klingons—or starting an all-out war.

Over in Germany, Cross Cult continue to deliver new German translations of Star Trek books, many featuring new cover art. The latest designs from their regular cover artist, Martin Frei, have been posted on their Star Trek books Facebook page. This is for Rätselhaftes Schiff, J. Steven York and Christina F. York's Corps of Engineers ebook, originally known as Enigma Ship. The German edition of this will be out next April. 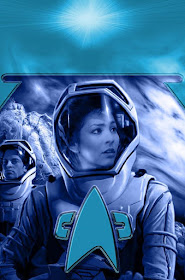 And this is Kriegsgeschichten 1, aka War Stories, Book One, by Keith R.A. DeCandido, due out May next year. 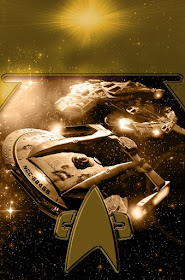 In other books news, TrekFM's Literary Treks' podcast recently had Dave Galanter on for a lively discussion about his new TOS novel, Crisis of Consciousness. As ever, best to wait to you read the book to listen, but a great "extra feature" once you have, with some interesting insights into how the book was developed.

To check out all the other recent cover releases, have a look back through my covers label. And for full listings of the the latest and forthcoming Star Trek books, and links to all my previous coverage, hit the books or prose buttons on my 2015, and 2016 schedule pages.