Hallmark have updated their website with listings for their three Star Trek Keepsake ornaments for this year. Their listings include much higher resolution versions of the previously released images of all three designs, plus previews in other media. Continue below to check out the range.

In-keeping with their offering for the past few years, the three ornaments continue three distinct styles of decoration. There is a starship, which this year is the USS Enterprise-C. The model is just short of five inches long, and features a battery powered light feature, which you can see demonstrated in a video on the Hallmark website.

There is a recreation of a scene, for the second time since this range began in 2004, we get a moment from The Wrath of Khan, this time the death of Spock. As is typical of this format, there is also a sound feature, playing out the dialogue between Kirk and Spock, and you can listen to that on the Hallmark website too. 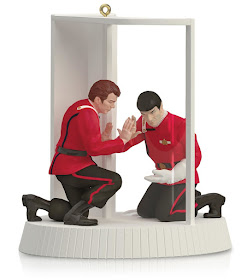 And finally there's a single figurine, from the ongoing Star Trek Legends series. Lieutenant Nyota Uhura will be the sixth character in that range, which now includes almost all of the main TOS crew. However the Hallmark website notes this will be the last in this series, leaving poor old Chekov no place on the Christmas tree!

All three should be available from July, just in time for Christmas! That is also when I would expect the designs for next year's range to be revealed - I wonder if the Legends series is being replaced with something new...