Due out in April is Uncertain Logic, the third book is Christopher L. Bennett's Rise of the Federation series, continuing the adventures of the former Enterprise NX-01 crew in the newly created United Federation of Planets. StarTrek.com have now revealed the cover for that book, created by Alan Dingman, which features a cunningly conceived version of the IDIC, formed out of the Kir'Shara and Vulcan. 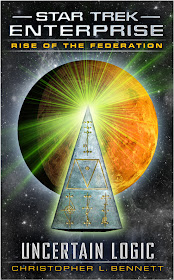 
Years ago, Jonathan Archer and T’Pol helped unearth the true writings of Vulcan’s great philosopher Surak, bringing forth a new era of peaceful reform on Vulcan. But when their discovery is seemingly proven to be a fraud, the scandal threatens to undo a decade of progress and return power to the old, warlike regime. Admiral Archer, Captain T’Pol, and the crew of the U.S.S. Endeavour investigate with help from their Vulcan allies, but none of them suspect the identity of the real mastermind behind the conspiracy to reconquer Vulcan—or the price they will have to pay to discover the truth.

Meanwhile, when a long-forgotten technological threat re-emerges beyond the Federation’s borders, Captain Malcolm Reed of the U.S.S. Pioneer attempts to track down its origins with help from his old friend “Trip” Tucker. But they discover that other civilizations are eager to exploit this dangerous power for their own benefit, even if the Federation must pay the price!

The rest of the 2015 books schedule was just recently announced, hit the prose button on my schedule page for the full line-up. And you can look to the reading order flow chart to see where this book sits in the wider continuity.