January brings us the first Deep Space Nine (branded) novel in over half a decade (!), the much delayed start of the nuTrek crew's five year mission, a variety of new Star Trek homewares, and much more. Continue after the jump below to check out all the Star Trek stuff due out this month: 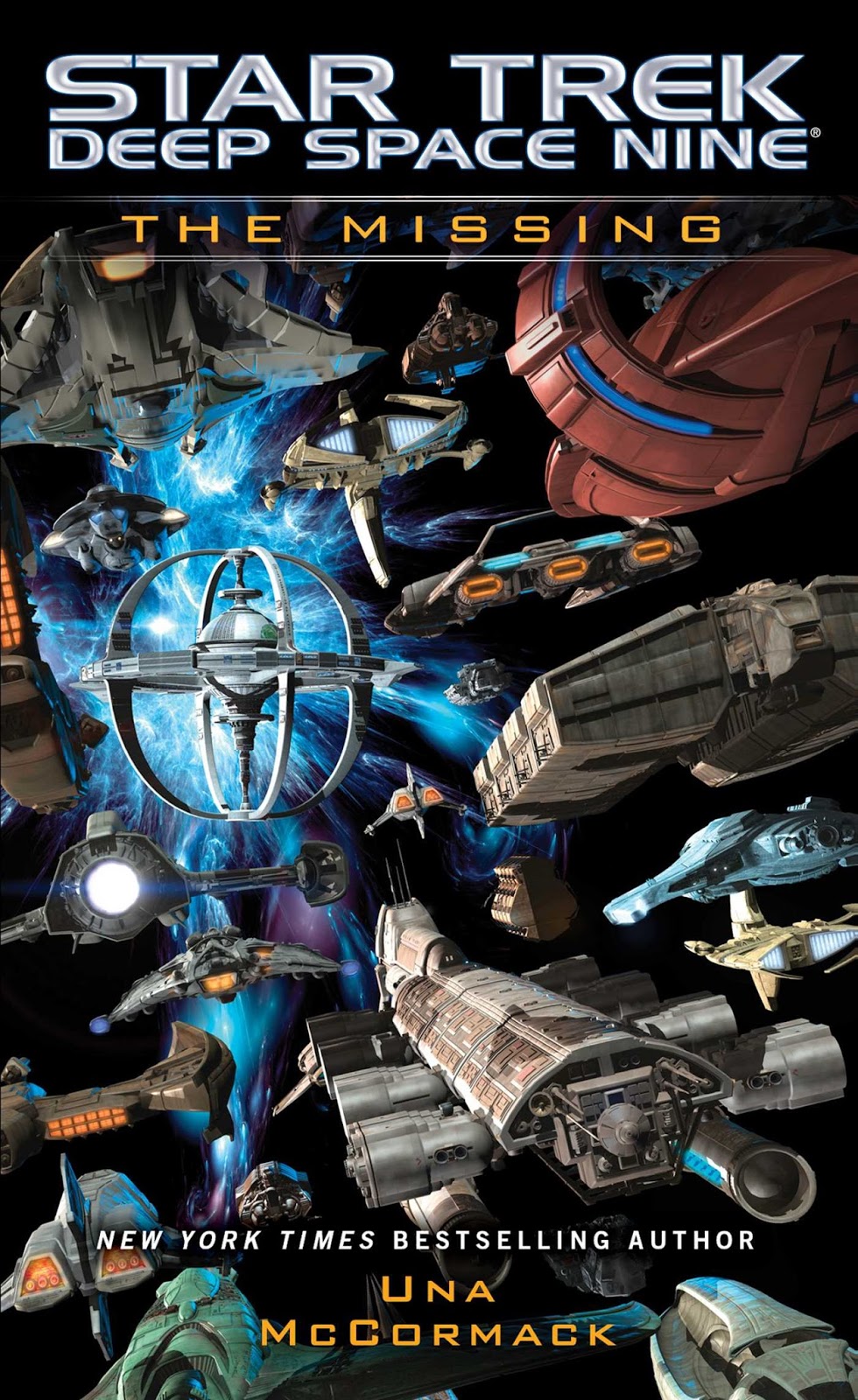 This month's novel should be available right now, and takes us back to the new Deep Space 9, after the events of The Fall. Incredibly, Una McCormack's The Missing is the first novel to be released under the DS9 banner in over five years! The last was also by McCormack, the brilliant The Never-Ending Sacrifice. Though of course we've not been short of DS9 stories in the various mixed series books in the intervening years (check out the reading order flow chart to see how all those books link). While a DS9 novel, there's also a peppering of TNG characters in this one, plus some original characters McCormack introduced in Brinkmanship. Here's the blurb:


The entire sector is waiting to see what the newly reopened Bajoran wormhole will mean for the shifting political landscape in the Alpha Quadrant. On Deep Space 9, Captain Ro Laren is suddenly drawn into the affairs of the People of the Open Sky, who have come to the station in search of sanctuary. Despite the opposition of the station's security officer, Jefferson Blackmer, Ro Laren and Deep Space 9's new CMO, Doctor Beverly Crusher, offer the People aid. But when Dr. Crusher’s highly secure files are accessed without permission—the same files that hold the secrets of the Shedai, a race whose powerful but half-understood scientific secrets solved the Andorian catastrophe—the People seem the likeliest suspects.

As tensions rise on the station, the science vessel Athene Donald arrives as part of its journey of exploration. The brainchild of Doctor Katherine Pulaski, this ship is crewed by different species from the Khitomer Accords and the Typhon Pact. Pulaski’s hope is that science will do what diplomacy has not: help the great powers put aside their hostilities and work together. But when the Athene Donald is summarily stopped in her voyage by the powerful vessel of a hitherto unknown species, Pulaski begins to wonder—will this first contact bring her crew together or tear them all apart? 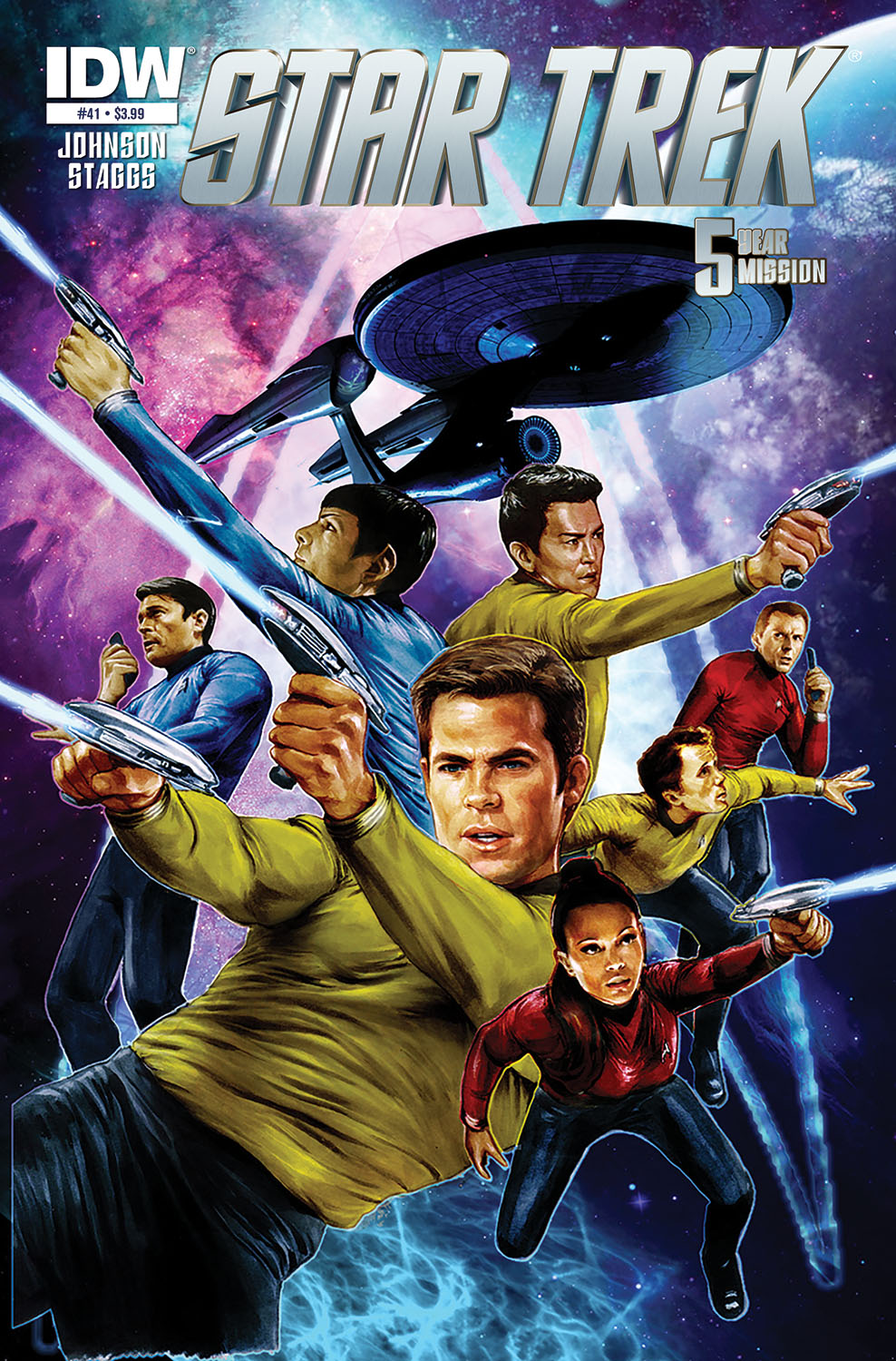 Meanwhile over in the alternate timeline, the crew of the Enterprise are finally embarking on their five year mission, in issue forty-one of the nuTrek ongoing series. This marks the start of a new 5 Year Mission sub-series, and is also the first half of a two-part story, Behemoth. Mike Johnson continues as the regular writer, while Cat Staggs takes on the artwork for the first time in the series.


"Behemoth,” part 1 of 2: In the wake of their century-spanning encounter with Q, the crew of the U.S.S Enterprise leaves explored space behind to embark on a new five-year mission of discovery! Beyond the reach of Starfleet communications, they can only rely on each other when faced with their first encounter in uncharted territory—and it might be their last! Don't miss this perfect jumping-on point for new readers, produced in association with STAR TREK writer-producer Roberto Orci!

Pre-order: Things From Another World, Forbidden Planet.
Last month's issue in the series, the final part of the DS9 crossover, The Q Gambit, hasn't actually been released yet, so that too should be out this month. 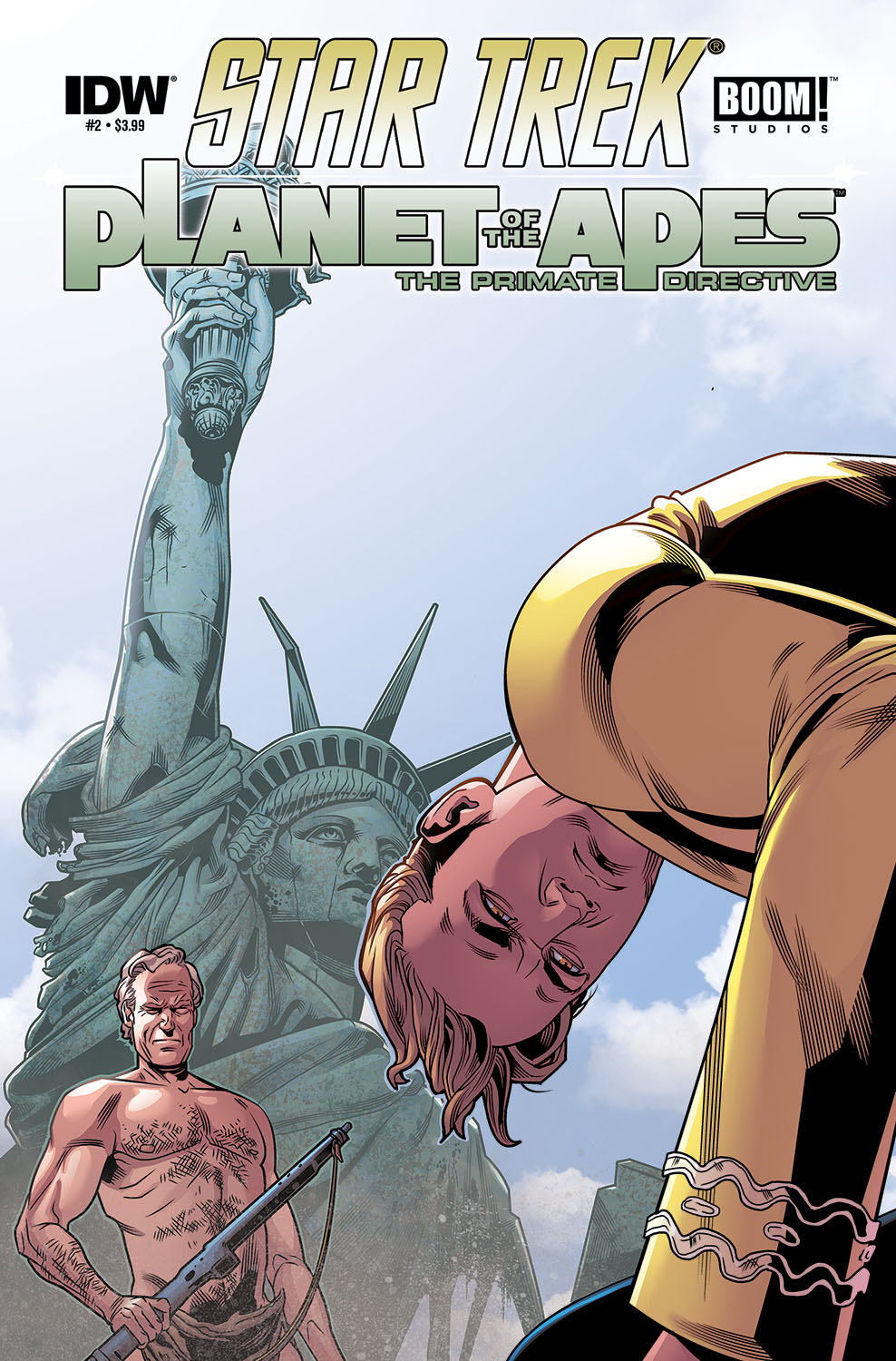 Also out from IDW this month is the second issue in the TOS/Planet of the Apes crossover, The Primate Directive. The five-part series is written by Scott and David Tipton, with art by Rachael Stott.


The colossal crossover nobody ever expected continues! Captain Kirk and the Enterprise crew have landed on the Planet of the Apes—but how?! And how are the Klingons involved? Plus: Taylor meets up with Kirk and Spock, but will he greet them with open arms? Or flying bullets? 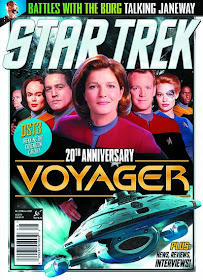 And from Titan Magazines is the latest issue of the Star Trek Magazine, issue one-hundred-and-seventy-nine in the UK, or fifty-two in the US. This issues focuses on Voyager, in celebration of the series' twentieth anniversary:


Can you believe it's 20 years since the U.S.S. Voyager was thrown light years across the galaxy and into the unknown expanse of the Delta Quadrant? In issue #52 of the official Star Trek Magazine we look back at the seven-year run of this much loved series, featuring exclusive interviews with series co-creator Rick Berman, and stars Ethan Phillips and Scarlett Pomers. We'll also be talking Janeway, revisiting Voyager's comic book adventures, and trekking across the convention circuit to uncover what draws fans to these massive events. Plus your favorite features, competitions and the latest Star Trek news! Available in Newsstand and PREVIEWS Exclusive cover editions!

The Eaglemoss shipyards have two more ships for this month, in The Official Starships Collection. Already in the hands of UK subscribers is issue thirty-seven, the Andorian crusier, which to the best of my knowledge is the first ever model of that ship. Later in the month will be the Delta Flyer, only the second rendition of that ship I believe, following the previous Hallmark release. 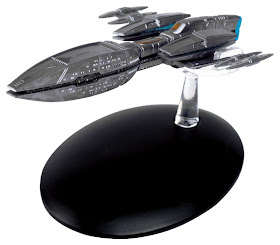 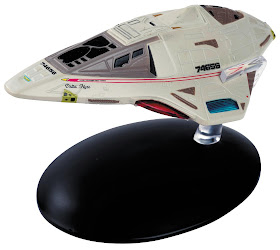 Pre-order: Things From Another World, Entertainment Earth, Forbidden Planet.
At a larger scale, DST's newest electronic starship release is a reissue of the refit Constitution class, specifically this version has the paint job and sounds to make it the USS Enterprise-A, The Undiscovered Country edition.

Pre-order: Amazon.com, Things From Another World, Entertainment Earth, Forbidden Planet.
And finally there are three new Attack Wing gaming miniatures from Wizkids, wave eleven of releases. This month's ships are the Romulan drone, Hirogen warship, and a squadron of Federation fighters. I believe all three of these are firsts! Although Eaglemoss have a larger and wonderfully detailed model of the Romulan drone coming soon.

The only props due out this month are the mysterious chirping combadges from Bif Bang Pow. Mysterious because they still seem to only be listed by Forbidden Planet, and no further detail or images have been released since they first appeared. Both TNG and Voyager badges are to be released, with sound features. The images below were released when listings first appeared. 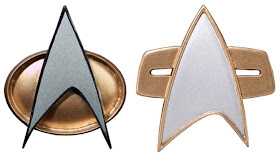 Previously listed for release this month was the new Search For Spock phaser from Diamond Select Toys, that seems to have been pushed back to March now though.

There are numerous new goodies from Westland Giftware to Trek out your home this month. For the first time Westland have drawn inspiration from TNG. Continuing their Star Trek cookie jar collection there are two character busts, Picard, and Worf. 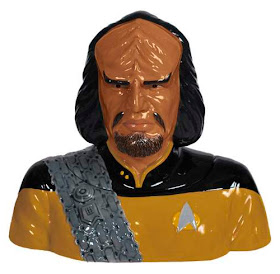 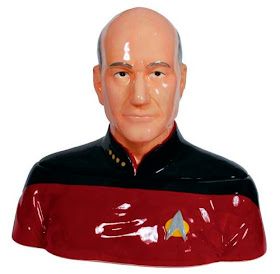 Salt and pepper shaker sets are also a recurring line for Westland, and for their TNG releases they've gone for two pairs of characters, Picard and Riker, and Data and Worf. 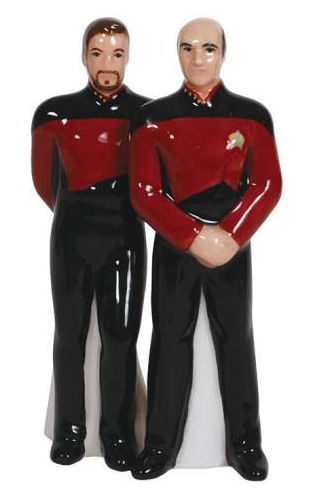 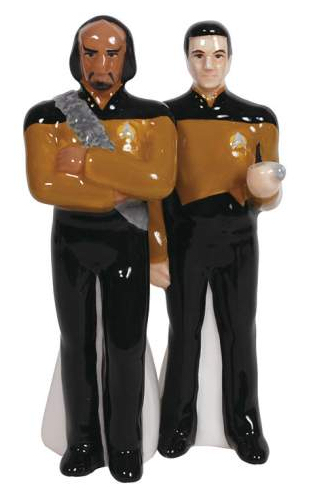 And there's also a range of character mugs, inspired by the TNG uniforms. You can choose from Picard, Worf, Troi, and La Forge. 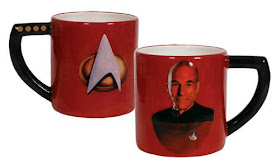 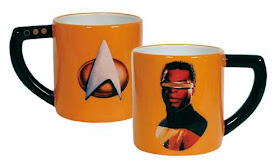 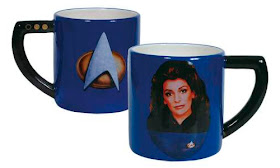 Finally, German readers also have some new books to enjoy this month. Cross Cul have two new translations, the second of Michael A. Martins Romulan War books, To Brave the Storm (known in German as Der Romulanische Krieg: Die dem Sturm Trotzen), and the seventh Corps of Engineers enovella, which is itself the first half a two-part story, Keith R.A. DeCandido and David Mack's Invincible, Book One (aka Unbesiegbar 1). 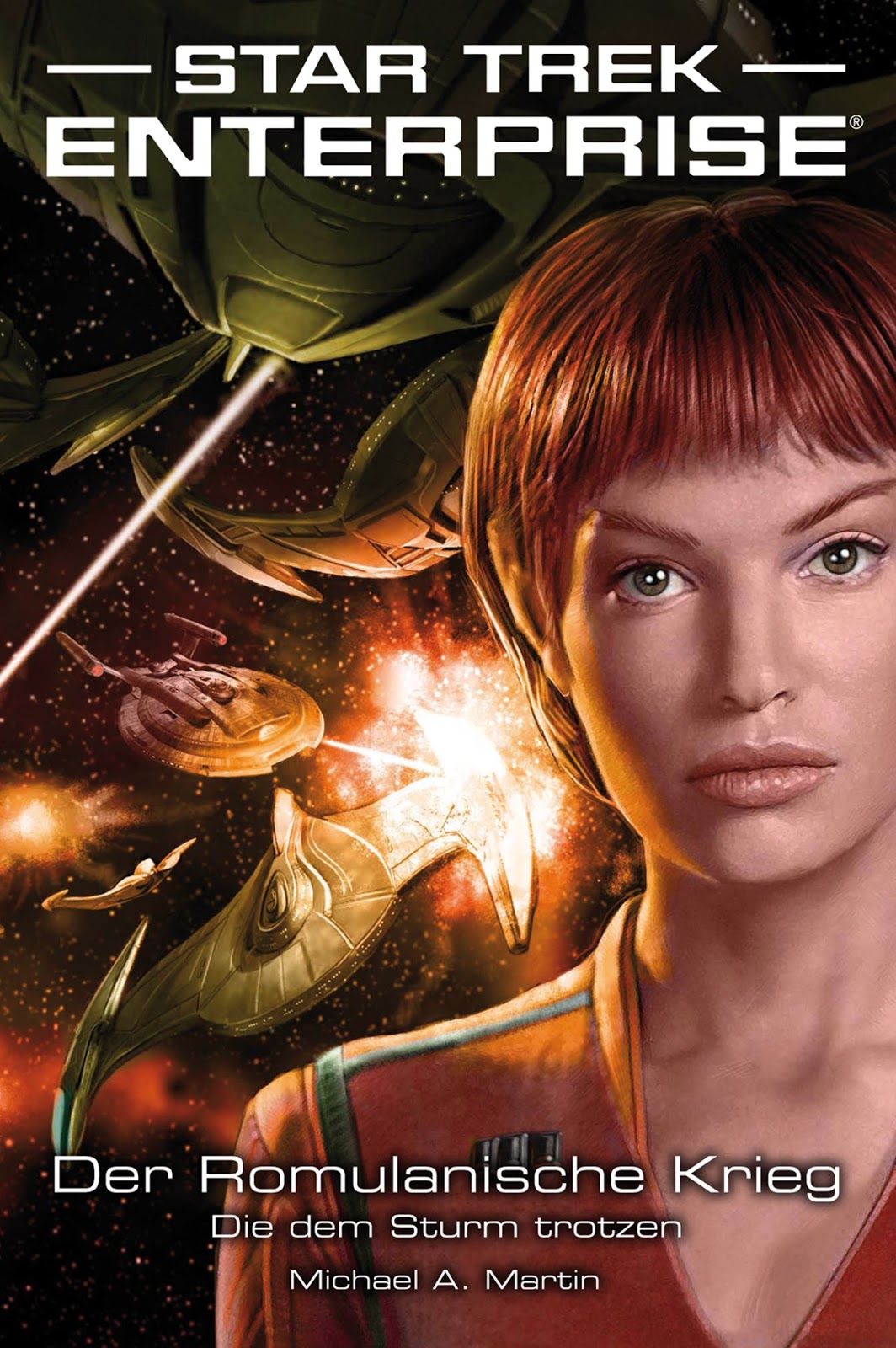 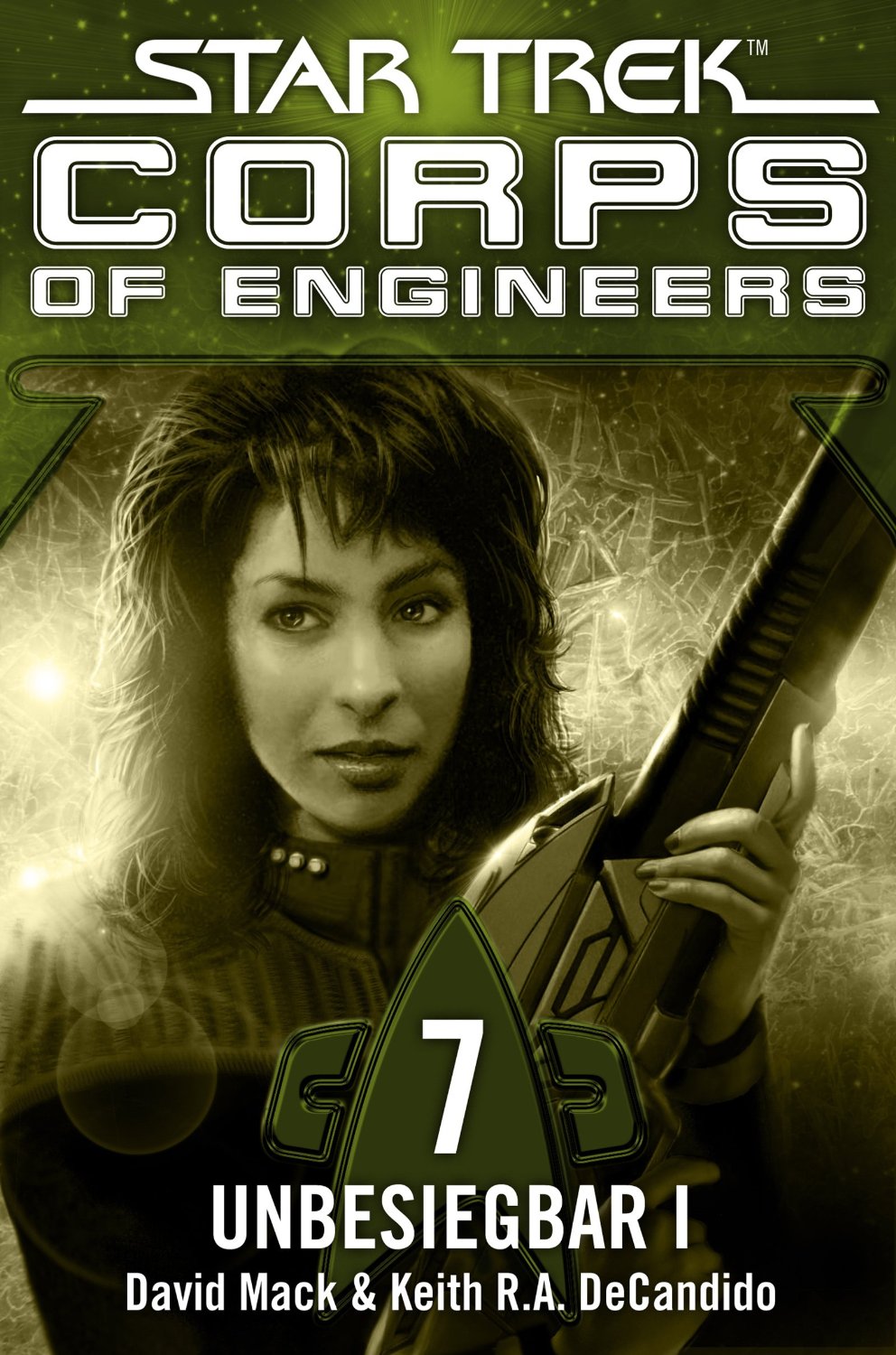 And that, is all, for now. But there are almost always new bits and pieces announced throughout any given month, which I shall of course report on as they appear. Last month's late editions included reissues of QMx's nuTrek insignia badges, with new magnetic backs, a range of mugs featuring Juan Ortiz's TOS retro print designs, and a new design folder for collecting the magazines from The Official Starships Collection.