The Simpsons do the TOS end credits

The most recent episode of The Simpsons, The Man Who Came to Be Dinner, was a science fiction adventure, featuring The Simpsons' regular aliens, Kang and Kodos. Naturally that meant a good peppering of sci-fi references, but they went all out on Star Trek for the closing credits, with a glorious homage to The Original Series' own end credits. Check it out:

Continue after the jump to oggle at each Simpsonised Star Trek image to your hearts content. And because I'm crazy, you can see them in their full glory, as I've removed the text:

So first up with have Marge as Vina, in Orion form, from The Cage/The Menagerie: 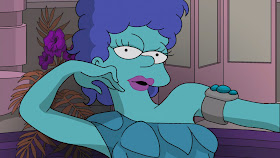 Homer as Kirk (but in red), fighting the Gorn, from Arena: 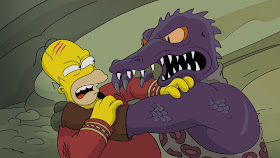 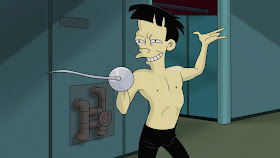 Expanding to other corners of the the Trekverse, grown-up looking Lisa is the Borg Queen! 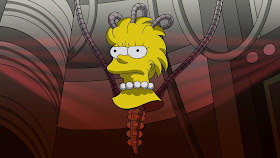 The crazy cat lady stands in for Kirk, as her cat/tribbles fall down on her.  Principles Skinner is Spock, while Superintendent Chalmers is a suitable unimpressed Nilz Baris, and Professor Frink is Mr Lurry, from the iconic scene from The Trouble with Tribbles: 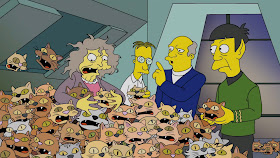 Bart takes the place of Scotty at work in a Jefferies tube, though he too has had a shirt change, and now works in the science division. This one is probably also from The Naked Time: 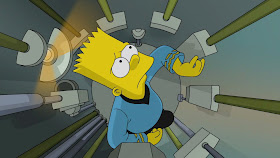 Some amusing mixed race partnerships form the face of Lokai and Bele from Let That Be Your Last Battlefield, formed here from Lenny and Carl, and Lou and Eddie: 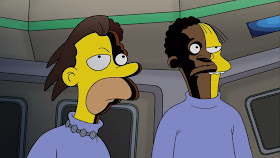 Homer is Kirk again, while talking to the Triskelion Providers from The Gamesters of Triskelion: 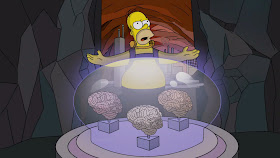 Another detour from TOS takes us to Deep Space 9, where Milhouse struggles to get his glasses to work with Quark's ears! 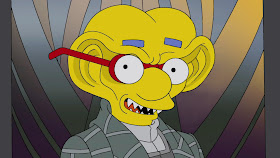 Barney is Harry Mudd, while Selma and Patty are robotic duplicates of his wife Stella, from I, Mudd: 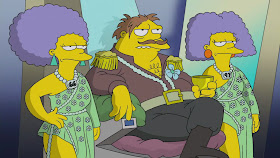 And finally Mr Burns brings you love, and tranya! Standing in for the puppet-form of Balok, from The Corbomite Maneuver: 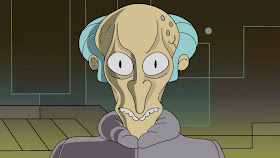