The fourth oversized special issue from Eaglemoss' Official Starships Collection will be the new Klingon Bird of Prey from Into Darkness, identified as a D4 class in the film, and solicited by Eaglemoss as a Klingon Patrol Ship. Posting on the Star Trek Modellers Facebook group, The Collection's manager, Ben Robinson, has shown off the model for the first time, and it is glorious: 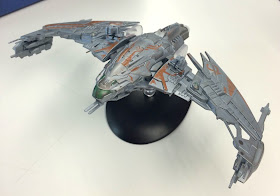 Ben is expecting this issue to arrive in the UK in February, and also commented on some of the background information we can look forward to in the accompanying magazine:


I've just been talking to Ben Grossmann and James Clyne about the design process and how it changed. It's a really interesting story. There are a ton of rejected Klingon ship concepts and the final ship did a lot more than I realised after just watching the movie.

Next up will be the USS Kelvin, and Ben further commented with a hint of more ships to come:


In an uncharacteristic bit of organisation I've already talked to the guys at ILM about that ship and about the six 'background' ships that make up the Fed fleet in the first movie.