Due out in March is Tony Daniel's second TOS novel, Savage Trade, and StarTrek.com have now revealed the cover, by Doug Drexler, for that book, with an Archer class ship stealing the show: 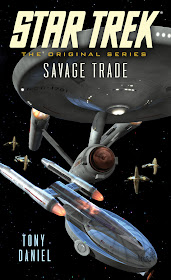 
The U.S.S. Enterprise, under the command of Captain James T. Kirk, is en route to the extreme edge of the Alpha Quadrant, and to a region known as the Vara Nebula. Its mission: to investigate why science outpost Zeta Gibraltar is not answering any Federation hailing messages. When the Enterprise arrives, a scan shows no life-forms in the science station. Kirk leads a landing party and quickly discovers the reason for the strange silence—signs of a violent firefight are everywhere. Zeta Gibraltar has been completely raided. Yet there are no bodies, and the entire roster of station personnel is missing... 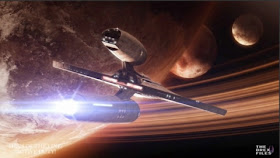 Doug Drexler also made an interesting comment on his Facebook today. When asked why the nuTrek images from Ships of the Line (which have so far only appeared in the calendar one year, back in 2011, when Tobias Richter made two fantastic images) have not appeared in the new Ships of the Line book, he, perhaps unsurprisingly, noted the difficulties of getting anything nuTrek approved:


The approval process was much too heavy. We had two JJ images in one of the calendars, and it was torturous. I literally had to go to JJ Abrahms on the side to break a stalemate. He gave the ok, and we were good for that year. It just wasn't practical to to do that every go-round.

Just a couple of other book newslets to mention too: While talking about his latest book, Foul Deeds Will Rise on a recent episode of Literary Treks, Greg Cox mentioned plans for his future novels. We already knew he had a TOS book coming next year, which he revealed will be a TV-era story, but also mentioned he has plans for another TOS story beyond that, which will return to the movie-era (if that project goes ahead, it's currently at the outline stage).

And finally, the TNG parody book by Mike McMahan, Star Trek: The Next Generation - Warped, An Engaging Guide to the Never-Aired 8th Season, has been pushed back in the schedule again, now expected in August (rather than May), next year.

For full listings of the the latest and forthcoming Star Trek books, and links to all my previous coverage, hit the books or prose buttons on my 2015, and 2016 schedule pages.