Star Trek 3 gets a new director, and release date 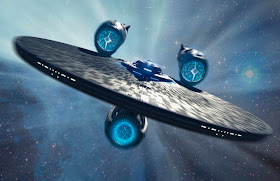 A couple of weeks ago Deadline reported that, after months of preliminary work already, Roberto Orci wouldn't be directing the next Star Trek movie after all. With 2016 in target for the release, in order to come out in the fiftieth anniversary of Star Trek, the race was on to find a new director, with many names being bounced about since.

Now Deadline have again broken news, this time confirming Orci's replacement in the director's chair: That person will be Justin Lin, best known for directing several films in the car/crime/action film series, Fast and Furious.

I can't say that pedigree fills me with hope, but Lin also has a background in television, and his credits there perhaps hint at a little more depth than the smashy crashy racing action stuff. Last year he directed the first episode of a series called Scorpion, which is about a global problem solving genius. He continued on as executive producer of that series, which would already have seen him working with nuTrek writers and producers Roberto Orci and Alex Kurtzman, who are producers there too.

His other television credits include directing several episodes of the comedy series Community, and the crime drama True Detective. He has also worked in one capacity or another on many other series, miniseries, shorts, and web-series, including executive production credits on a couple of time travel(ish, in the loosest sense) web-shows, Squad 85 and Reality Reboot.

Lin's work seems to be focused on action and comedy, which at the very least is consistent with what the nuTrek movies have delivered so far. Hopefully he can also bring a little something more, for those of us hoping to get a bit more Star Trek morality, hope, and exploration in the next chapter!

Meanwhile Roberto Orci will be continuing on as producer, although it's not currently known whether he will also still have a hand in writing. He, along with newcomers J.D. Payne and Patrick McKay, presumably were pretty far along with the script. But could whatever pushed Orci out of directing also impact the shape of the script? If so will something completely new be possible in time for the 2016 release?

One of the rumours about the cause of the changes comes from Badass Digest, who suggest Paramount was pushing for the new film to try and follow the success of Guardians of the Galaxy, hoping to propel Keenser into a more dominant role as a stand-in for Rocket the raccoon... I certainly wouldn't mind a little more alien exoticism in the next movie, after so much Earth focus in the series so far. Are Scotty/Keenser even remotely similar to Groot/Rocket though? Perhaps it's time to bring in Arex and M'Ress! If this rumour is at all accurate, the band of misfits (a la the Guardians) does seem to be one of Lin's tropes, although how he could apply that to the now happy family of the Enterprise crew, who know?

UPDATE: Variety now report a release date for the film too, confirming the 2016 release, the next Star Trek movie will arrive on the 8th of July.