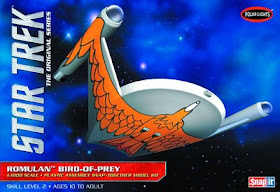 Coming next year is a new TOS Romulan Bird of Prey model kit from Round 2 Models. I have previously previewed the new 1:1000 Polar Lights model itself, and now Things From Another World have added a listing, revealing the new box art. They are expecting this ship to reach us in March. Here's the description:


Few Star Trek ships are as popular or mysterious as the Romulan Bird-of-Prey. The villainous ship played a key role in the original series episode 'Balance of Terror.' The ship's iconic design and blazing bird graphic have been painstakingly researched to deliver the utmost in authenticity for this snap-together model kit. The kit features all decals needed to decorate the ship accurately. 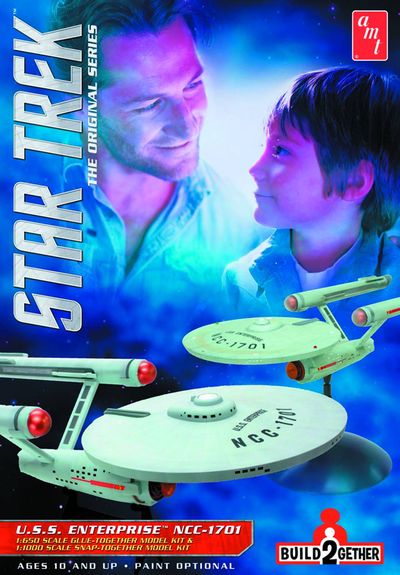 Also newly listed by Things From Another World is another new release, the Build2gether USS Enterprise model kit set, which includes two different models of the original Enterprise, intended for parents or otherwise to indoctrinate, *ahem* inspire, their underlings in the art of starship building.


This AMT Build2gether set features 2 kits of the USS Enterprise that offers a great opportunity for seasoned sci-fi fans to share their interest with the next generation. It features an 18" long glue-together kit which is perfect for moderately-skilled modelers and features water slide decals to decorate the ship. An 11 1/2" long version of the ship is also included and features snap-together assembly for novice modelers. It also features a sticker sheet to supply all of the ship's markings.

I suspect this actually amounts to a reissue of both the existing Polar Lights 1:1000 kit and the AMT 1:650 kit. The new two-pack version is also expected in March.

To see what other model ships are coming up, hit the "models, toys, and games" button on my 2015 schedule page. And to check out all the model kits on offer from Round 2 Models, see my model kits list, and separate list for the 1:2500 scale Cadet Series range.